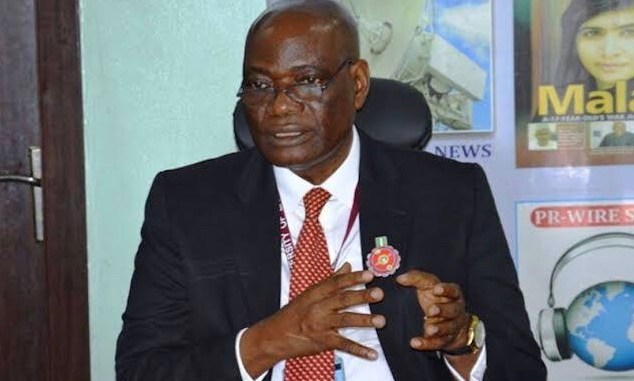 The reinstated Vice Chancellor of the University of Lagos, UNILAG, Professor Oluwatoyin Ogundipe, on Thursday resumed office, thanking President Muhammadu Buhari for insisting on due process being followed in the administration of the institution.

He also had kind words for Vice President Yemi  Osinbajo, SAN; the Minister of Education, Malam Adamu Adamu; the Executive Secretary of the National Universities Commission NUC, Prof. Abubakar Rasheed; the Acting  Vice Chancellor, Prof. Folasade Ogunsola; all the staff unions in the school among others.

The VC, who addressed the workers  from the foyer of the Senate Building of the school, said his being returned to office was not by power but by divine intervention.

Ogundipe, who resumed to a rousing welcome by workers of the universiy, said he saw his recuse from office for about three months as a kind of sabbatical.

He also used the occasion to debunk the rumour that he had compiled a list of who to punish or sack in  the university for not supporting  him during his travails.

“You have all stood for due process and the matter is not about the University of Lagos, but the university system in Nigeria in general.

“You have invested years of your lives into this university. Let us be united as the issue is not about academic against nonacademic staff, Let us work together as we are committed to moving the university forward.

“I sincerely appreciate and thank the Acting VC, she is a thoroughbred, somebody you can rely on. She is what the Yoruba call Omoluabi.

“I have not recklessly looted the university. Since 1996, I have held a number of positions here and I  have not been found wanting. I am  committed to giving my best to this university,” he said.

Earlier, the Acting Vice Chancellor,Prof. Ogunsola, expressed gratitude to God for sustenance during the period of the crisis.

“Today is a day of victory. It is a day to celebrate the university. It calls for introspection. Why did it happen? And it will not happen  again.

“Together we stand, divided we fall. There is no problem within the university that we cannot solve. We  should not externalise our problems, Despite our problems, we recognise that the University of Lagos is  bigger than any individual. Nobody can debrand us,” she said.

“We are sweeping tyranny, impunity and divisiveness away from our university. The victory is for the  people. It is not for ASUU, NASU, NAAT, or SSANU. I thank the Acting VC for her resolve. She stood true to type, “ he said.

Ashiru blasted the Chairman of the Special Visitation Panel, Prof. Tukur Saa’ad, for saying he regretted endorsing the report of the panel.

The Branch Chairman of the Non-Academic Staff Union, NASU, Kehinde Ajibade, also praised Ogunsola for not being the type desperate for  position.

He advised the VC to take the welfare of the staff as a priority.

The Acting VC later handed over to Ogundipe inside the VC office.