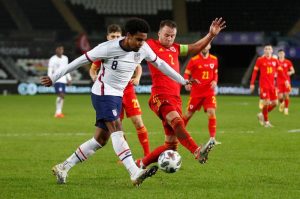 The U.S. men’s team stepped on to the pitch for their first international match since February with personalised anti-racism messages emblazoned on their training jackets.

Gregg Berhalter’s team wore the jackets during the national anthems ahead of Thursday’s friendly against Wales at Swansea, and both teams took a knee before kick-off in support of the Black Lives Matter movement.

“With the goal of inspiring action on social justice issues, all of the players had ‘Be the Change’ adorned on the front of their anthem jackets,” the team said in a statement.

“Also, on the back of the jacket, each player had the opportunity to include a personalised message representing something meaningful to them.

“The spirit of their message is that each and every person has the ability, opportunity and responsibility to make a difference in our own way.”

Some of the personalised messages included ‘Unite In Truth’, ‘Love In All’, ‘Stronger Together’ and ‘End Police Brutality.’

Both sides fielded young experimental line-ups and the match ended 0-0.

The U.S. takes on Panama in another friendly in Austria on Monday, while Wales will meet Ireland in the Nations League in Cardiff on Sunday.