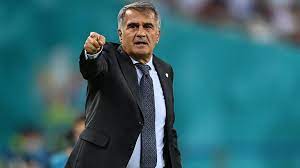 Besiktas manager, Senol Gunes has opposed the club’s move for Nigeria forward, Anthony Nwakaeme.
The club’s hierarchy are interested in bringing Nwakaeme back to Turkey four months after the big striker left for Saudi Arabia Professional League club, Al Feiha.
The 33-year-old helped Trabzonspor claim the Turkish Super Lig title last season.
The striker, however, rejected a new contract proposal from Trabzonspor and opted for a move elsewhere.
Nwakaeme scored 47 goals and provided 40 assists in 145 appearances during his four-year stint with the Black Sea Storm.
According to Turkish news outlet, Aksam, Gunes is not interested in having Nwakaeme in his team at the moment.
It remains to be seen if the club will push ahead with the move or agree with the gaffer’s decision.