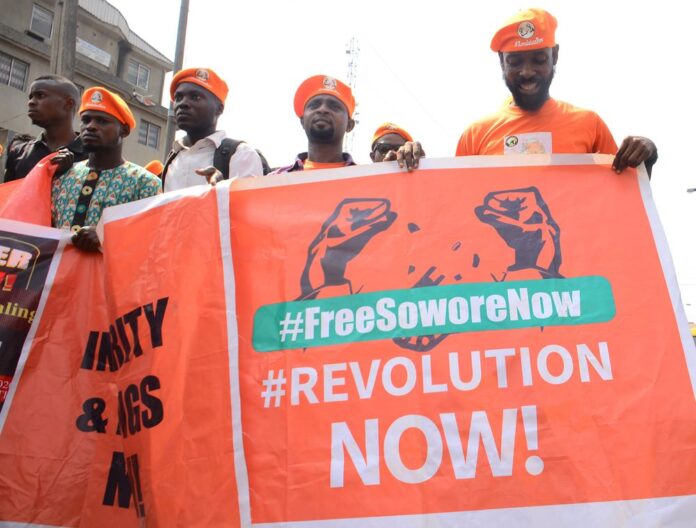 Abimbola Abatta, Osogbo
Protesters under the auspices of #RevolutionNow movement on Thursday morning took to major streets in Osogbo to protest alleged harsh policies implemented by the President Muhammadu Buhari-led administration.
The protesters, who gathered at Old garage around 8:30am, were chanting anti-government songs to condemn the hardship faced by Nigerians.
Operatives of the Department of State Security trying to stop the protesters from proceeding with the protest but to no avail.
The peaceful protesters of Coalition of Revolution (CORE) movement decried the brutality they suffered in the hands of operatives of the Department of Security Service (DSS) in Osun State.
The DSS operatives were accused of beating and arresting 11 members of the group during the protest. The arrested members were later released at the entrance of DSS office.
One of the protesters who is a member of “Take it Back Movement”, Nigeria, Olaoluwa Owoeye said the porous regime of Buhari should resign with immediate effect.
“We are calling for immediate resignation because we cannot continue with this act of indiscipline; we cannot continue with this act of corruption; we cannot continue with this act of fuel hike; we cannot continue with this act of electricity hike.
“We are saying immediate and unconditional release of the materials that have been taken such as our phones, money. We are also calling for the probe of the battery regime, the DSS head, we are saying he should withdraw his neck from this unruly act that they perpetrate against Nigerians.
“They should do that within 24 hours or else, they are going to see us on the streets again.”
Also speaking, Temitope Fagunwa Maberu said Nigeria is the poverty capital of the world. “We have the poorest people living in the whole world domicile in Nigeria, and yet the Nigerian state has the audacity to tell us that we are celebrating independence.
“We are saying that this independence is nothing to write home about; it is nothing to celebrate because the entirety of what we are told as citizens should celebrate in the 21st century, we are not entitled to it.
“We are also sending a message that the Nigerian state under its current liberal practice, the capitalist practice cannot guarantee us the normal dividends that all citizens should enjoy.
“We are saying that only a socialist government can transform the entirety of whatever we want to demand as citizens of this country. And we are saying that the insecurity in the north is also tied to the failure of the Nigerian government. Any government that cannot guarantee protection and safety as a citizen, that government has failed.
“We are saying this because in 1960 when they told us that we gained independence, many of our people did not understand that the kind of Independence they gave us was flag independence.
“Many people did not understand that the kind of Independence they gave us was nothing but political independence. But we have refused to gain the right independence, which is economic independence. That is why we are here today. That is what has brought us this mess; the mess of failure. The mess of maladministration, and no matter how much you talk about it, Nigeria is a failed country.
“There is no need for us to negotiate this. There is no need for us to discuss this. The government has failed to protect the lives of her citizens, and that government had no reason to stay in power, which is the point about Buhari government.
“The Buhari government should be ashamed of itself, and those that are supporting the Buhari government should be ashamed of themselves because this government has failed both inside and outside.”