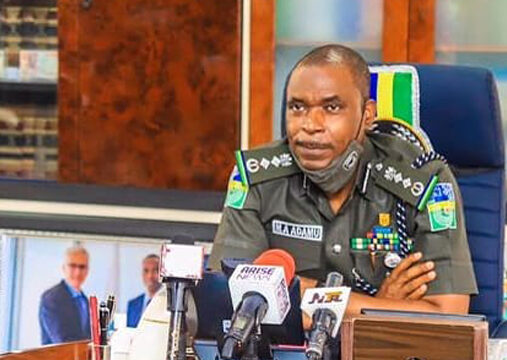 …Governors to meet I-G on Wednesday

Like a Maradona dribbling Nigerians, the Inspector General of Police, IGP Mohamned Adamu has announced the replacement of notorious defunct Special Anti Robbery Squad (SARS) with a new team known as Special Weapons and Tactics (SWAT). This follows nationwide protests over the brutality of Nigerians by members of defunct SARS extortion through unauthorized search of phones and laptops of youths perceived to be engaged in internet fraud.

The Force Public Relations Officer (FPRO), Frank Mba, disclosed this in a statement on Tuesday in Abuja.

The country has been rocked by protests by irate youth against the brutality of the notorious Police unit (SARS) in recent days. The protest has led to the deaths of at least 10 persons.

Despite the disbandment of the unit, submission of demands by the protesters, and the promise of extensive reforms by President Muhammadu Buhari and the police hierarchy, protesters have refused to leave the streets.

Mba said prospective members of the new team will undergo a psychological and medical examination to ascertain their fitness and eligibility for the new assignment.

“They are to commence training at the different police tactical training institutions nationwide next week.

“Personnel from the Police Commands in the South-east and the South-south will be trained at the Counter-Terrorism College, Nonwa-Tai, Rivers.

Mba said the I-G had ordered personnel of the defunct SARS to report at the Force Headquarters for debriefing, psychological and medical examination.

He said the psychological and medical examination were a prelude to further training and reorientation before redeployment into mainstream policing duties.

According to him, the medical examination will be carried out by the newly set-up Police Counselling and Support Unit (PCSU).

He said the unit would henceforth be engaged in psychological management, reorientation and training of officers of the Force deployed for tactical operations and other duties.

The FPRO said the unit, domiciled with the Force Medical Department, would be coordinated by the force medical officer.

He said membership of the unit would be drawn from psychiatrists, psychologists, medics, pastors and imams, public relations practitioners, civil society and other human rights groups with relevant qualifications and expertise.

Mba pledged the commitment of the I-G to ensure successful and holistic implementation of the police reforms.

He enjoined the public, particularly protesting citizens, to exercise restraint and allow measures being put in place to come to fruition and engender a Police Force that would meet the yearnings and aspirations of citizens.

The SWAT idea is apparently drawn from the United States where an eponymous unit provides specialised security intervention for police teams across the country.

The 36 states governors are to meet with the Inspector-General of Police, Mr Mohammed Adamu, on the security situation in the country, particularly the Federal Special Anti Robbery Squad (FSARS) protests going on across the country.

A statement issued by Mr. Abdulrazaque Bello-Barkindo, the Nigeria Governors’ Forum (NGF), Head, Media And Public Affairs, in Abuja on Wednesday said that Adamu would be joining the NGF 19th teleconference meeting to explain the security situation.

Bello-Barkindo said that the governors in the virtual meeting beginning by 2pm on Oct. 14, would also be briefed by the technical committee on electricity tariffs.

“The Ministers of Works and Housing, Communications and Digital Economy and Humanitarian Services and Disaster Management will also be on hand to address the governors, one after the other.

“The Humanitarian Resources and Disaster Management Minister, Umar Farouk, will be discussing how to lift a hundred million Nigerians out of poverty with the governors.”

Other matters to be discussed at the meeting according Bello-barkindo include the Nigerian Economic Summit Group (NESG) Summit scheduled for the last quarter of the year and the Basic Healthcare Provision Fund (BHCPF).

He added that the governors would also discuss the conclusions of the distribution of palliatives by the Coalition Against COVID-19 (CACOVID) a conglomeration of banks and some public spirited philanthropists including Alhaji Aliko Dangote.

Bello-Barkindo added that the governors would also get an update on the World Bank-assisted States Fiscal Transparency, Accountability and Sustainability programme (SFTAS) for results.

“The governors will also get an update on Gov. Ifeanyi Okowa-led Committee which briefs the Governors regularly on the activities of the Presidential Task Force (PTF) on the COVID-19 pandemic.”

The #ENDSARS protesters have demanded that the Lagos state Commissioner of Police, Hakeem Odumosu should produce officers in Surulere that shot and killed the innocent man Orelse. They promised that on Wednesday Lagos will be shut down.

Nigerian NewsDirect gathered that not less than 2,000 protesters in Lagos on Tuesday marched to the Lagos Zone 2 headquarters of the police to make their demands known to the Assistant Inspector General of Police, Illyasu Ahmed.

The #ENDSARS protests, which were held at two locations in Lagos, witnessed a massive turnout of protesters which included lawyers and music stars among others.

The protesters at Lekki toll gate, in Lagos Island, disrupted movement in the axis, as there was no vehicular movement at the toll gate on Tuesday.

In a similar manner, about 2,000 protesters marched to the Police command, Zone 2, where they presented their five demands to the police.

The demand tagged “5for5”, by the protesters, include the followings:

The release of all arrested protesters; Justice for all deceased victims of police brutality and appropriate compensations for their families; Setting up an independent body to oversee the investigation and prosecution of all reports of police misconduct (within 10 days).

Others are: In line with new Police act, psychological evaluation and retraining of all disbanded SARS officers before they can be redeployed; Increase police salary so that they are adequately compensated for protecting the lives and properties of the citizens.

Responding to the protesters, Fayoade Adegoke, a Police representative at Zone 2, said their demands have been received and are being treated urgently at the highest level.

However, similar protests are ongoing in other parts of Nigeria including Osun, Oyo and Rivers States.

Unlike the Monday protest, which resulted into violence causing the death of two persons and injury to others, Tuesday’s protest was peaceful in Lagos State.

Stakeholders kick over change in name

Speaking with Nigerian NewsDirect, Comrade Adeola Soetan, said, “EndSARS is a by-product of government therapy and economic terrorism which has accumulated into serious anger and frustration by Nigerians especially the youths.

According to him, “I have seen EndSARS protest, even though it was more less a spontaneous leaderless mass movement initially.

“This means it is not only about ENDSARS. It is just the cloak of economic issues that grieve the members of the society. The government has no option but to bow.”

He explained that the news that the IGP dissolved SARS is a misinterpretation.

“What really happened is that IGP agreed to the dissolution by the citizens. IGP could have dissolved it before now, if they really wanted to dissolve FSARS because there were several complaints in the past for many years,” he said.

Also, Barrister Joe Nwokedi reacting said, “It is something I quite expected because I know the Nigerian Police Force (NPF) will not scrap FSARS.

“When people are protesting the end of FSARS, I was doubtful as regards whether NPF will end FSARS.

“I know the NPF because I handle very high-profile criminal cases and I know it is going to be very difficult for the Force to scrap SARS.

“In as much as we have their excesses, they have been engaged in some issues of killings among other issues.

“It will be difficult for NPF to end SARS but it will reform SARS.”

“When people were protesting for the end of SARS, I told them that we should protest for the reformation of the NPF, because NPF has different units and SARS is to handle robbery cases.

“SARS are trained to deal with notorious robbers. Nigerians are misdirecting the whole thing because SARS cannot be ended. They might tell the people that they will reform SARS but SARS will still be retained.

“SARS as a unit is as old as NPF. In my early days in practice SARS was called ‘Anti-robbery Squad’ and are in almost all the police formation that combines criminal, robbery and other cases.

“The NPF have different units such as Human Right Department, Monitoring Group, domicile section in charge of murder cases. These units do different jobs.

“The SARS are just going about their role in a wrong way by doing things extra-judicial, unlawful and extorting people.

“We should deploy our energy to look for a reform by coming up with a well documented agenda of what we want the NPF to be like but not scrapping of SARS.”

He said that many years ago, there was always robbery operation around Allen Avenue Ikeja around his office. It was SARS that busted those robbers.

He commented that the SARS is a very important unit of the NPF. Unfortunately, SARS is going beyond the limit of power given to them.

“NPF should consider the kind of people that will be recruited, because some of them are very notorious like criminals.

“Although in my interrogation with a SARS office, he explained that they sometimes dress like the criminals to mix up with them so as to get information for investigation but now they have turned away from that objective of investigating criminals to pursuing internet fraudsters known as ‘Yahoo boys’ who are not robbers but they are doing something illegal.

“Investigation of internet fraud is not the job of SARS.”

“SARS should direct issues that does not have to do with crime to the appropriate unit of NPF like the Special Fraud Unit (SFU) who are into fraud related to bank transactions, internet and other issues”.

He condemned the wrong ways SARS has been maltreating people, rather suspects should be transferred to the right unit for proper investigation.

He added that if SARS is scrapped, arm robbers will over run the society.

“Therefore, the NPF should reform SARS and the general public should be informed to checkmate their excesses,” he said.