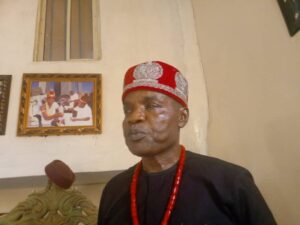 Ezeonwuka made the remark when he led some members of the Sports Writers Association of Nigeria (SWAN), Anambra Chapter, on a tour of the facility on Wednesday to mark the state SWAN Week with the theme:  “Promoting Sports Through Responsible Journalism”.

He said that Nigeria had a large pool of talented athletes in all sports, who could rule the world, if well groomed, packaged and exported, citing sports as one career that could give people legitimate stay in Europe, America, Asia and other foreign countries as well as enable them earn huge pay.

Rojenny, as he is fondly called, lauded the role of sports writers in the development of sports in the country and urged them to continue to highlight athletes that excelled, as well as keeping administrators on their toes.

According to him, sports was a booming business abroad and Nigeria has footballers and other athletes who can excel anywhere in the world; ”what we need to do is discover them, export them and sooner than you think, remittances will start coming”.

“Many countries are surviving on what they get from players abroad; Nigeria can mitigate the effect of COVID-19 from sports.

“What I have here is an Olympic stadium not soccer stadium, it was built over 35 years ago, we have hosted national and continental events here but now, the society is not making the best use of it.

“This is a breeding ground for sports champions, let sports administrators bring trainings and competitions here because most states don’t have what is in Rojenny,” he said.

He described sports journalists as necessary pillars in sports development, who should be encouraged by governments and private sector to succeed.

Earlier, Tony Oji, chairman of SWAN in Anambra said kicking off the 2020 SWAN Week at Rojenny was significant in view of the contributions of the stadium to sports development in the country.

Oji, who presented a souvenir to the ace facility investor, described him as a torch bearer in private sector investment in sports, because what he built as an individual was yet to be surpassed several years later.

He promised that the SWAN would continue to promote sports through responsible journalism.

Report states that part of the activities of the SWAN Week includes: tour of some sports facilities in Anambra, novelty match and a Lecture to be delivered by Tony Nezianya, a veteran sports journalist. A recognition and Award night would round-off the week on Dec. 4.