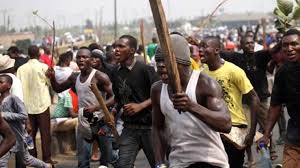 Some streets in the area are deserted as suspected cultists armed with locally made guns stormed Cassette Bus Stop, Aguda, shooting sporadically to announce their presence.

An eyewitness who craved anonymity told Newsmen that he and others were currently hiding somewhere and could see the hoodlums parading the area with guns.

They hoodlums are said to be prepared to engage a rivalry group in intense gun-battle in the area.

“Hoodlums fire several shots from locally made guns at Cassette Bus Stop, Aguda in Surulere preparatory to epic rival clash. Business owners lock up shops abruptly as residents scamper for safety,” an eyewitness spoke with the Newsmen from hiding around 3:14pm.

“We saw more than ten of the hoodlums gathering on Willy Omiyi Street, off Cassette bus stop. I also noticed that they kept the locally made guns at open space that supposed to be a car park aquired by a Catholic church in the area.

“We are yet to see RRS men in the affected parts of Aguda,” the eyewitness said.

Police Public Relations Officer, PPRO; Muyiwa Adejobi could not be reached as calls made to his phone were not picked.