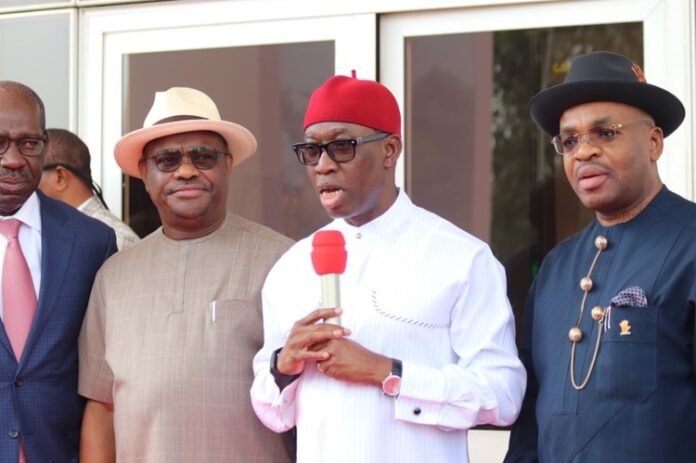 South-South Governors and stakeholders from the geopolitical zone have demanded privatisation of refineries and  restructuring in line with the principles of true federalism to guarantee peace, security and stability of the country.

Chairman of the South-South Governors forum, Ifeanyi Okowa, presented the position of the zone during the regional stakeholders’ meeting with presidential delegation led by the Chief of Staff to the President, Amb. Ibrahim Gambari at the Government House, Port Harcourt on Tuesday.

Okowa explained that residents of South-South are committed to restructuring the country to guarantee true federalism and devolution of powers to the states to create and manage their own police and security architecture under a federal structure.

The Governors called for relocation of the headquarters of major oil companies, NNPC subsidiaries from Lagos and Abuja to the South-South region.

The stakeholders also called for the revitalisation of all the ports in the region such as the Calabar, Port Harcourt and Warri ports.

They also asked the Federal Government to immediately privatise all the refineries to make them functional and boost the economy of the region.

The stakeholders further demanded relocation of all the subsidiaries of the Nigeria National Petroleum Corporation (NNPC) to the region.

The Governors observed that the country was not at peace with itself and not working as it should, particularly, for the people of the South-South region.

They requested immediate implementation of the consent judgment entered in the Supreme Court Suit No: SC/964/2016 to enable the South-South region gets its share of $55bn shortfall of collection on deep offshore and inland basin production sharing contracts.

The governors further called for the reconstruction and rehabilitation of the region’s major seaports in Port Harcourt, Calabar and Warri to enhance the economic development of the region.

They demanded that the two refineries in Port Harcourt and one in Warri  that have continued to bleed the country’s resources in the name of turnaround maintenance should be privatised.

In his response, Gambari said the stakeholders meeting was at the instance of President Muhammadu Buhari.

He said the President ordered the presidential delegation comprising all the ministers from the region to visit and consult the representatives of the people regarding the recent EndSARS protest.

Gambari noted that reports indicated that there were instances , where breakdown of law and order was reported across various locations in the South-South states.

He lauded the governors of the South-South  states for their quick response and actions in addressing the EndSARS crisis.

The Minister of Transportation, Chibuike Amaechi was,  however, absent.