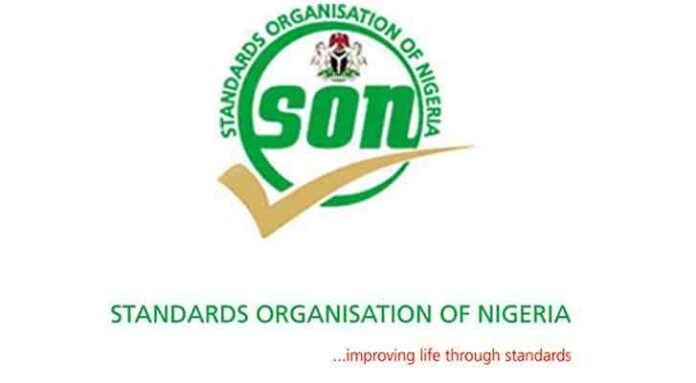 In its fight toward ensuring  standardization, the Standards Organisation of Nigeria (SON) recently destroyed substandard Liquefied Petroleum Gas (LPG) Cylinders and Roofing sheets worth over N450 million in Lagos, a press release from the agency yesterday signed and sent to media houses by its Head, Public Relations, Bola Fashina has disclosed.

According to the release,  breakdown of the products which SON said were imported from China and Turkey, include; 4×40 containers of LPG Cylinders of various sizes, 15 rolls of aluminium roofing sheets and 15 bundles of fake corrugated roofing sheets.    Speaking to newsmen at the destruction site located at the SON warehouse in Amuwo Odofin, Lagos, Director General (DG) of SON, Osita Aboloma, represented by the agency’s Director, Compliance and Inspectorate, Engr. Obiora Manafa said the products were apprehended in warehouses across Lagos State.

He said: “The products were seized for non-compliance to standards, failing laboratory test and being illegally imported without obtaining the mandatory SON conformity assessment certificates. The products are thus not fit for use from the results of our Laboratory tests and analysis.”

He expressed the agency’s regret at having to destroy the goods giving the huge costs involved in importing them, but stated that SON cannot compromise the safety of Nigerian citizens and their properties.

On how the products came into the country, he said: “Most of these products were discovered through SON raid on warehouses following classified information received from patriotic Nigerians and were found to be substandard. They may have been brought in through the seaports or land borders.”

He stated further that the owners have refused to come forward for fear of prosecution, stressing that the long arm of the law will eventually catch up with them.

On what happens after the destruction exercise, Manafa explained that they will be disposed to recycling firms and the proceeds remitted to the Federal Government’s Treasury Single Account (TSA).

Also speaking during the destruction exercise, SON Group Head, LPG, Engr. Nwaoma Olujie, urged Nigerians to take extra care in buying LPG Cylinders by confirming the country of origin of the cylinder, brand name and address of the manufacturer the date of manufacture with SON Product Registration number for imported Cylinders and the Mandatory Conformity Assessment Programme (MANCAP) Logo and number for locally manufactured Cylinders.

“Those important features of a genuine cylinder must be embossed on the shroud (handle) or foot ring (stand/base) of the LPG Cylinders. Any cylinder that does not have them or have them just painted on the cylinder is substandard. The lifespan of an LPG Cylinder is 15 years from the date of manufacture as provided in the Nigerian Industrial Standard (NIS 63:2013),” Engr. Olujie added.