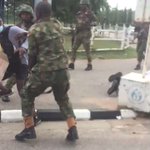 Despite repeated directives and calls for peaceful containment of protesters, security operatives in the federal capital territory have continued to wreck havoc and invoke violence on #SARSMUSTENDNOW protesters.

Reports by newsmen revealed that soldiers of the Nigerian army and Brigade of Guards stationed at the National Assembly were seen to be beating and seizing phones of protesters including the head of Arise TV crew,Ferdinand Duroha.

In a video made available on air by Arise TV, the soldiers blocked protesters heading towards the National Assembly from taking the protest to the legislative arm of government.

Protesters in their numbers were chanting “End Police brutality” and knelt down to demonstrate the peaceful nature of the protest even as they sang the national anthem.

In spite of the peaceful disposition, the soldiers beat up the protesters and snatching the Arise TV camera.

Following subsequent reprisals and doggedness by the protesters,the soldiers gave in and returned the cameras back to their owners while appealing to the protesters to go back to the Unity Fountain to hold their protest.