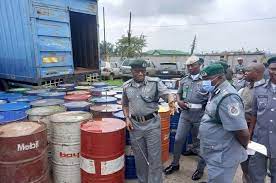 The Federal Operations Unit Zone A of the Nigeria Customs Service (NCS) says it has intercepted 34,725 litres of smuggled petrol, 12 trailers of rice, among other contraband.

The unit reported that it arrested nine suspects in connection with some seizures that were intercepted while trying to smuggle them into the country.

The Command also collected the sum of N24,957,351.71 revenue through meticulous checks on import documents, followed with the issuance of demand notices to importers/agents found to have short paid their duties.

Acting Controller of the unit, Comptroller Hussein Ejibunu made this known during a briefing at the headquarters for the successes recorded in the month of July, 2022.

Compt. Ejibunu noted that the revenue recovered would have been lost to some non-compliant importers/agents if not for the watchfulness and the uncompromising disposition of officers of the Unit.

Also, 201 cartons of expired seasoning (Chicken Cubes); 331 cartons of frozen poultry VIII. 6 units of used imported cars; 2,634 cartons of slippers/shoes; 900 pairs of used shoes, and 42 units of used motorcycles and other items were intercepted during the period under review.

According to Ejibunu, the goods intercepted are hazardous to the health and safety of the public, adding that nine suspects were arrested in connection with some of the seizures.

Commenting further on the seizures made, the Ag. Controller said, “A misplaced priority as demonstrated in the use of hard earned forex for the importation of expired seasonings (Chicken Cubes), used clothes, shoes and tyres is not only injurious to the economy, but also a despicable act by some desperate importers to make monetary gains at the detriment of other peoples’ health.

“Let me use this medium to remind you that poultry products remain a prohibited item under the import list, because of its attending health and economic implications. It may interest you to know that the federal government in her wisdom banned the importation of poultry products so as to support the growth of our domestic poultry farms, and to protect them from foreign competition.

“Secondly, it was discovered that in the process of transporting these products, some hazardous chemicals are applied to help in preserving the products; since its frozen state of being cannot be sustained till it reaches the final consumers. This act calls for public concern as it could be a source of different ailments and diseases.

“Perhaps, there is no Nigerian family that has not been affected by either an accident caused by a substandard or used tyre, skin diseases or cancers, and many more; as a result of patronage to prohibited imported products into the country. While we collectively sympathise with those that are affected by this menace, we are also calling on patriotic citizens to cooperate with the Customs Service and other law enforcement agencies to stamp it out.

“You may recall that, some weeks ago, Nigerians had to pay more for premium motor spirit (PMS) amidst scarcity. Despite the fact that the federal government had subsidised the product for local consumption, many Nigerians still passed through this hardship; partly because some unscrupulous citizens choose to satisfy their egoistic desires by smuggling the products into the Republic of Benin; some of which were along the border corridors.”

While noting that the daredevil smugglers are unrelenting in executing their unlawful and vile businesses, he solicited for useful and timely information from patriotic Nigerians to enable the service tame smuggling.

Ag. Controller Ejibunu encouraged compliant importers and agents to sustain their compliance level, as the Unit and the Service remain resolute at facilitating legitimate trade.