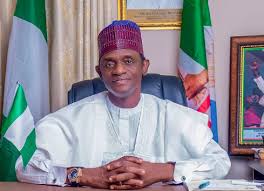 The Senate President, Ahmad Lawan on Wednesday felicitated with the Governor Mai Mala Buni, as he marks his 53rd birthday.

Yobe State Governor is set to celebrate his 53rd birthday on Thursday.

According to the statement released by Ola Awoniyi, Special Adviser (Media) to the Senate President, Lawan joined the family, friends and political associates of the Governor as well as the entire people of Yobe State in celebrating the occasion.

He said the occasion is worthy of celebration because Governor Buni has devoted his life to the service of his people and excelled in the calling.

“I rejoice with His Excellency, members of his family, friends, political associates and our good people of Yobe State on this auspicious occasion.

“It is particularly worthy of note the giant strides the administration of Governor Buni has made in just 17 months in Yobe, which are visible in improved security, infrastructure and general economic development of the state.

“The Governor has also commendably discharged the additional responsibility assigned to him by our great party, the ruling All Progressives Congress(APC) to resolve internal conflicts and reposition the party for its historic leadership role in nation-building and socio-political development of Nigeria,” Lawan said.

The Senate President wishes the Governor many more years of good health for continued service of his state and fatherland.