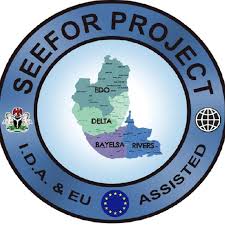 This is coming on the heels of the initial five-year partnership deal, which was earlier extended by one year each in 2018 and 2019, is billed to end in the next couple of weeks

While a cross section of Deltans and benefiting communities apparently basking in happiness of the project, they have called for its extension, other communities that are yet to benefit from the partnership are already lamenting the “soon-to-end” which they say would permanently lock them out from benefiting.

Other projects visited include: construction of cargo boat at Agbodobiri community in Burutu Local Government Area, rehabilitation, procurement of learning and teaching equipment/ starter packs at the welding and fabrication, electrical, automobile departments of Ofagbe Technical College, Ofagbe as well as the provision of learning tools at Ozoro vocational centre, Ozoro, and the interlocking of 200 meters of road each in Enerhen road, Effurun, construction of 30 open market stalls and 10lockup stalls at Adeje community, Okpe, Poultry farms at Aragba community, Pig farm at Okurekpo community among others.

In each of the project sites, and communities visited, the beneficiaries of the intervention programme, however commended the partnering Agencies, The World Bank, European Union,( EU) and the Delta State Government for establishing the projects in their various communities, which according to them had been enhancing their socio-economic wellbeing.

Some of the beneficiaries who spoke to our Correspondent, one of them, the President Tamara Ogbo Cassava Plant, Mr. Ebiyiekpokoye, the Matron, Obaghoro Community Health Centre, Ms. Anne Ojejemu, a market woman, Mrs. Sisanojiringho among others commended the state government, the World Bank, and European Union ( EU) for coming to their aid through the provision of intervention projects in the various communities in the state.