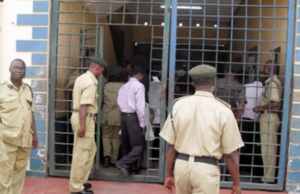 A dangerous crisis has began to unsettle the Nigerian Correctional Service in Uyo as some officials and management of the facility continue to trade allegations and counter allegations of corrupt practices, some involving inmates.

This is after a group of officials of the Service recently approached newsmen with series of allegations against the Deputy Controller of the Service in Uyo, DCP Babafemi Jaiyeoba.

The officials had presented a three page petition but without name and address of the petitioner, with series of allegations ranging from starvation of inmates, due to alleged diversion of food items, extortion, secret burial of late inmates who lost their lives due to hunger and diversion of vocation tools donated.

But Jaiyeoba when confronted with the allegations attributed it to a recent cell search where bags of Indian hemp, kitchen knives and other dangerous weapons were discovered and later linked to some of the officials who got infuriated into rebelling against the authority of the service.

The DCP further explained that such officials began instigating ‘the condemnations’ against the authority, leading to a decision to relocate such inmates to Port Harcourt.

Infuriated, that their illicit businesses would be adversely affected by such drastic steps to restore sanity to the Correctional Service centre, one of the officials, according to the DCP decided to register his protest by skipping work for a week.

On resumption, the DCP said he decided to subject the official to minor disciplinary actions, which he bluntly rebuffed.

“On taking further steps to instill discipline, the official openly threatened to ‘rubbish me,’ and personally listed the forgoing allegations against my person,” he said.

He said he could never have diverted food and other items meant for inmates to private use, as he has no reason to have stooped so low adding that the federal government has provided all the needs of the center.

“We have continued to do our best to take care of the people in our custody. We ensure they have regular medical care, we feed them well, even with scombia fish in their meals.

“Though we have lost six out of 1005 of them within the year, but most of them died in hospitals. Though we have done our best to save as many as possible through prompt medical interventions, but death as you know is inevitable for humans.

“We know where these allegations are coming from, we can mention their names, but because their cases are still being investigated, we have to allow them, while we continue to do the right thing,”Jaiyeoba explained.

The DCP disclosed that the State Ministry of Education recently approved a secondary school for the centre with an additional approval for a center for the conduct of West African Examination Council examinations and NECO within the facility with a future plan to enroll successful graduates of the just approved schools to the National Open University Nigeria.