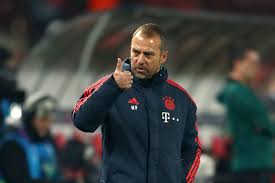 “Leroy will miss out,” Flick said on the eve of Wednesday’s German Super Cup match against Borussia Dortmund.

“He’s got a capsule injury in his knee. Hopefully he will be back after the international break.”

Sane will miss the Borussia Dortmund game as well as Sunday’s league match against Hertha Berlin, and Germany matches against Turkey, Ukraine and Switzerland between Oct. 7 and Oct. 13.

He could return in the German Cup against lower League Dueren on Oct. 15 or two days later in the Bundesliga in Bielefeld.

Bayern Munich enter the Super Cup in search of their fifth title of the year.

But they are coming off a 4-1 Bundesliga drubbing at Hoffenheim which ended an unbeaten run over 32 games and almost 10 months in all competitions.

“Borussia Dortmund have a fantastic, young side and they also have experience in their ranks. They play attractive, offensive football, which I like.

“This will be a test against one of Germany’s best. This game will help to develop us,” Flick said.

“We will try to win the match. We have lost one game but have had a very successful period. Therefore every player can have full faith in his strengths.