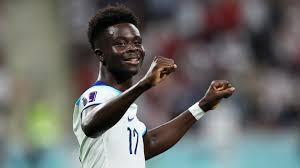 Saka said Shaw helps him a lot coming into the England squad, adding that he is so funny.

The 21-year-old has been in great form for England so far in Qatar.

Speaking to Lion’s Den about his favourite teammate, Saka said (via HITC): “You know what, where is the camera? I know he’s watching right now.

“I have got to say his name, Luke Shaw. Hello, Luke Shaw. He helped me a lot coming into the squad, he is so funny, he is always just trying to annoy me.”