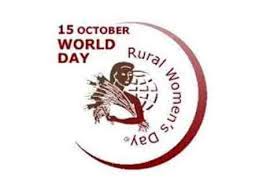 International Day of Rural Women: Making case for empowerment of rural women as agents of food security and economic development

The crucial role women and girls play in sustaining the wellbeing of the society as well as socio-economic development at rural level cannot be over-empasised.

Findings showed that women account for a substantial proportion of the agricultural labour force, both in formal and informal sectors and they perform the bulk of unpaid as well as domestic works within family ties and households in the society.

However, it is saddening that these hard working women and girls, especially those in the rural areas suffer disproportionately from multi-dimensional poverty.

According to United Nations, the World’s one billion people who continue to live in poverty circle are heavily concentrated in rural areas. Poverty rates in the rural areas across most regions are higher than those in urban centres. According to the UN report, smallholder agriculture produces nearly 80 per cent of food in Asia and Sub-Saharan Africa and supports the livelihoods of well over 2.5 billion people.

United Nations also revealed that women who are into farming may be as productive and enterprising as their male counterparts, but are less able to access land, credit, agricultural inputs, markets and high-value agric food chains and obtain lower prices for their crops.

Structural barriers and discriminatory social norms continue to serve as constrain to women’s decision making power and political participation in rural households and communities. Women and girls in rural areas lack access to productive resources and assets, as well as public services, such as education, health care and infrastructure, including water and sanitation, while much of their labour remains invisible and unpaid, even as their workloads become increasingly heavy due to the out-migration of men.

Globally, with few exceptions, every gender and development indicator for which data are available shows that rural women fare worse than rural men and urban women, and that they disproportionately experience poverty, exclusion and the effects of climate change.

On 15th October 2008, the first International Day of Rural Women was observed after it was established by the General Assembly in its resolution 62/136 of 18 December 2007, to recognize “the critical role and contribution of rural women, including indigenous women, in enhancing agricultural and rural development, improving food security and eradicating rural poverty. It holds the day before World Food Day.

In Nigeria, according to the Federal Ministry of Agriculture and Rural Development, women account for 75 percent of the farming population, working as farm managers, and suppliers of labour. As a large portion of the farming population, women’s efforts in the agricultural sector are hindered by formal and traditional rules. Generally, the extent of gender involvement in agricultural production varies across ethnic groups in Nigeria.

Nigerian women farmers work alongside with their male counterparts, with some clear distinctions in activities between them. In most cases, the men execute the tedious tasks, such as land clearing and felling of trees, gathering and bush burning, and making ridges, while the women engage in planting. In addition, women also participate in weeding, harvesting, and on-farm processing, and selling of farm produce.

Generally, they are rarely connected with agricultural export crops such as cocoa, rubber, cotton, but rather involved with the production of food crops like maize, cowpea, melon, pepper, cassava and vegetables. In some cases, women participate in small scale animal production, like small ruminants, poultry and aquaculture.

In line with the words of Kofi Anan that says “there is no tool for development more effective than the empowerment of women”.  The Ogun State Governor, Prince Dapo Abiodun initiated an empowerment scheme to take care of women across the State tagged ‘Oko’wo Dapo”

He described the initiative as a demonstration of his administration’s unreserved commitment towards creating a more prosperous life for all women in the state, irrespective of their geographical location, gender, religious or political affiliations and their economic stratification.

According to the Governor,”it is imperative to empower our people economically, in order to fulfil our political mantra of “Building Our Future Together “. Our women deserved to be taken care of and we will continue to ensure an enabling environment for Public Private Partnership that is fundamental to the creation of an enduring economic development and individual prosperity for our people”.

Going by this determination, the First Lady, Mrs. Bamidele Abiodun in her address to  the women emphasized that the Oko’wo Dapo scheme was put together to empower them by maintaining their standard of living, create assets and in all ensure poverty reduction .

Oko’wo  Dapo is   an empowerment initiative that  provides refundable micro loans to millions of women, small and micro entrepreneurs, traders and artisans who typically lacks collateral and steady employment or a verifiable credit history. It is aimed to provide group clusters that would provide the required collateral for the loan. The scheme is based on a sustainable approach where the repayment will go back to the scheme, made available for lending to other female owned small and micro businesses.

If beneficiaries of the scheme use the funds prudently, it would be the beginning of their journey towards financial security and independence from poverty and this is achievable if all stakeholders involved join hands with government in helping the women secure sustainable business and a brighter future.

By and large, there is need to engage more in empowering women across the rural areas. When women are empowered they, in turn, contribute to their family’s income and become active change leaders in their communities. It is no gainsaying that if you build a woman, you build a nation.

In order to achieve this, government at all levels should introduce adult education and training for women as these would enhance their capacity development, build confidence and make them stand tall in their various communities.

In addition, provision of basic tools will also help them to start, operate, build and expand their businesses. Government can initiate more women agencies in various areas to help nurture their dreams and monitor them grow to be self reliant.

On health, Women are primarily vulnerable to various forms of health issues in different communities. They face all forms of challenges; they are the bearers of the epidemics of deadly communicable diseases. Also, there is high rate of maternal and infant mortality, so government and Non Governmental Organisations (NGOs) should come to the aid of the rural women and provide basic amenities such as health centres, potable water, sanitary facilities as well as clean environment and access to basic monthly stipends to take care of their pressing needs.

Above all, platforms should be created for rural women mentorship and development in different communities as this will go a long way at empowering women to be confident and resourceful at living to their true potentials by speaking and advocating for their equality and justice at all times.

The Coordinator,  Rural Women Studies Association (RWSA), Nigeria Chapter, Prof. Olubunmi Asimolowo opined that students of higher institutions should be encouraged to delve more into research, make presentations and participate in conference activities and round table discussions in order to encourage more rural women in shaping the rural communities.

RWSA, is a Non- Governmental International Organisation founded in 1997 to promote and advance farm and rural women’s/ gender studies in a historical perspective by encouraging research, promoting scholarship, establishing and maintaining links with organisations that share same goals as ways of building the capacity of rural women.

The creation has thus helped in improving the livelihoods of rural women by providing the girl child with basic exposure right from childhood with support from government, NGOs and well spirited individuals.

According to Anthony Bourdain, an American Celebrity Chef “Food is everything we are. It’s an extension of nationalist feeling, ethnic feeling, your personal history, your province, your region, your tribe, your grandma. It’s inseparable from those from the get-go”. So as we celebrate this years’ International Rural Women’s Day themed “Building rural women’s resilience in the wake of COVID-19”, all stakeholders must reach out to the women in various communities, embrace their strong and passionate interests in the provision of food for the survival of mankind.

Oluwaseun Boye, an Information Officer with the Ogun State Ministry of Information and Strategy writes via oluwaseunboye@gmail.com.

International Day of Rural Women: Making case for empowerment of rural women as agents of food security and economic development