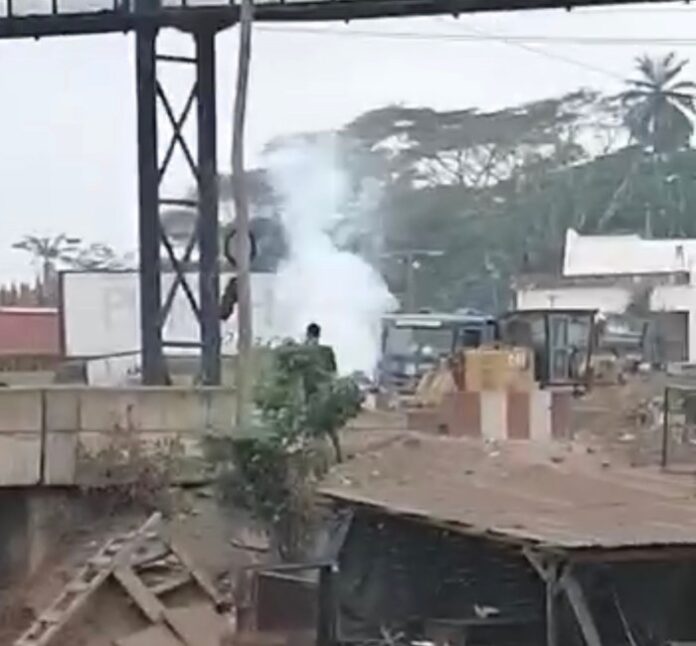 Passers-by and motorists were stranded at the Arepo-Magboro axis of the Lagos-Ibadan Expressway when a gas pipeline ‘exploded’ near the PUNCH head office.

It was gathered that many commuters scampered for safety causing gridlock as the gas continues to erupt with a huge hissing sound heard kilometres away in Arepo Estate and the Magboro community.

According to reports, the gas pipeline ruptured during construction works by men of Julius Berger company on the Lagos-Ibadan Expressway on Wednesday.

A resident said that a loud sound was heard around 9:30 a.m. According to him, the pipeline eruption caused panic as many residents of the estate rushed out of their apartments.

Also, another resident of Arepo Estate, Adebayo Mike, said the incident had resulted into gridlock along the expressway.

“Our estate management has asked everyone to be cautious of that route. The filling station at Arepo bus stop has also been notified to shut down,” he added.

Meanwhile, the Ogun State Traffic Management Agency has warned motorists to find alternatives routes and those trapped in the traffic to keep safe as first responders have arrived in the area.

“An incident of gas leakage, through a damaged pipeline by Julius Berger, the Construction Company, working on the Berger-interchange stretch of the Lagos-Ibadan Expressway, which has resulted into an explosion around Punch Newspaper, Magboro, has been reported with traffic gridlock on both inbound and outbound sections of the expressway,” TRACE said in a statement.

“Road Users around the axis are implored not to be jittery as Safety Officials from TRACE, FRSC, police, and the fire services are on top of the situation.

“Those trapped in traffic are admonished to be patient, while those presently making their journey towards the expressway and are in haste should please seek alternative routes,” the statement added.

The FRSC Corridor Commander, Lagos-Ibadan-Egbeda Corridor, Kehinde Hamzat, advised motorists not to panic, saying that “professionals are taking care of the situation”.

Hamzat said this in a traffic advisory for users of Lagos-Ibadan Expressway around Magboro.