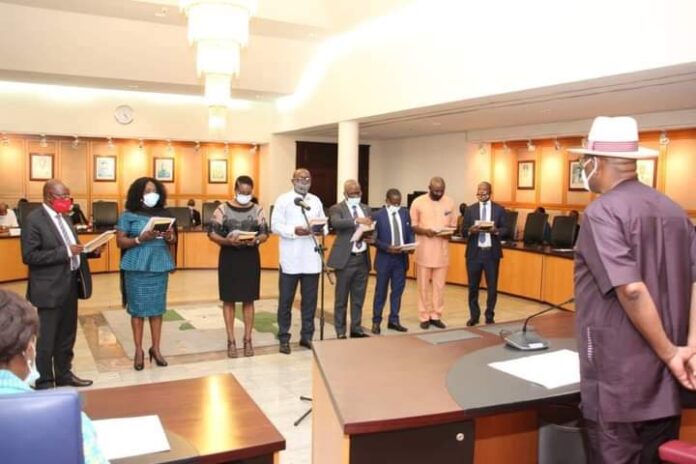 Ahead of the forthcoming local government election in the state, the Rivers State Governor, Barr Nyesom Wike has sworn in chairman and commissioners of the  Rivers State Independent Electoral Commission (RSIEC) in Port Harcourt.. He charged them to organise  a free and fair election, devoid of partisanship.

The governor said he will not hesitate to remove any of them found to be a card carrying member of any political party in the state.

“You have been appointed today to serve Rivers State in organizing a credible, free and fair election as chairman and commissioners of the electoral umpire.  Conduct an election that will appeal to all political parties and voters alike. If I find out that any of you is a card carrying member of any political party, I will not hesitate to remove the person,” Wike warned.

The  RSIEC members are Justice George Omereji (rtd),chairman. The commissioners include, Mrs. Doris Chuka, Mrs Chioma Ochia , Prof. Lysius Gilbert , Mr. Barine Nwikinanee, Dr Solomon Egbe and Dr Iyeneone Tamunobenetonari.The governor said arrangement would be made for the Independent National Electoral Commission (INEC) to train  them on the rudiments of conducting an election.

The RSIEC officials had earlier been screened by the Rivers State House of Assembly.