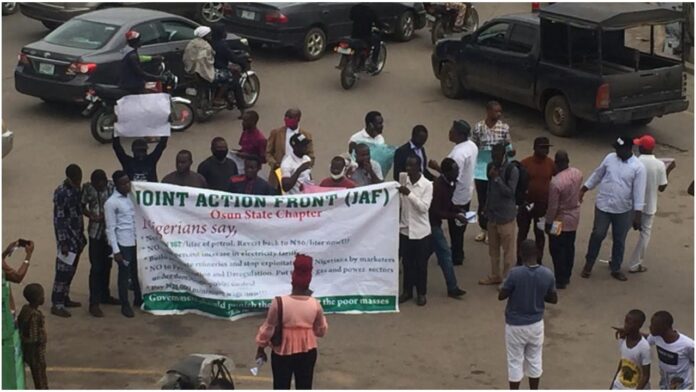 The aggrieved Human Rights Activists called for the immediate resignation of the President or he reverses the increment in the petroleum price and electricity tariff with immediate effect.

The members of JAF had embarked on the peaceful protest against the dual approval of new electricity tariff and increment in the pump price of petrol, describing it as the highest level of insensitivity and wickedness from President Muhammad Buhari-led APC government.

Speaking, the convener of JAF, Comrade Alfred Adegoke called on Nigerians to resist the increases in fuel price, electricity tariff and VAT, adding that if the President cannot reverse the price from the N160 to the N86.50 that the price was from 2012 to May 10, 2016, then he should voluntarily resign his position as the president.

Adegoke said Nigerians, especially Southwesterns were being deceived to vote for Buhari by the leadership of the APC using the name of Late Obafemi Awolowo and Chief Bola Ige to lure them into believing their cause.

In Adegoke’s words:  “This struggle has just started. We must stop it. The president has said that petroleum is going to N300, are you prepared to pay that? If we accept that today, education will be more commercialised. Electricity, you can’t buy. House, you can’t buy. Food, you can’t buy. The government cannot provide water, houses or jobs. That is the mess we have been seeing. Irresponsible government all the time. We say no that this must end.

“This Government has failed us. President Buhari should reverse the price of fuel from the N160 to the N86.50 that the price from 2012 to May 10, 2016, and if he knows he cannot reverse it then he should resign with immediate effect, Adegoke said.

Also Speaking, Comrade Waheed Lawal, Chairman Coalition for Civil Society in the state, called on labour unions such as NLC, TUC among others to declare a general strike and mass protest.

Lawal who educated people of the state on the need to join the struggle said they would continue to express their displeasure over the dual approval of new electricity tariff and increment in the pump price of petrol through demonstration.

He said “We can’t do this in isolation. TUC, NLC, they have not said anything. And we know the meaning of that silence. Silence has a meaning. If they don’t want their people to stamp them to death on the street, they have to come out now and issue a statement.

Also Speaking, the Director of Program, Centre for Sustained Dialogue, Comrade Waheed Saka said, everything about the new tariff regime speaks about how insensitive and wicked the leaders of this country have become even in a democracy.

Saka further explained that “How on earth will anybody happily approve a new tariff regime and increment in the pump price of petrol at a time our people are still languishing in pains and pangs triggered by lockdown due to Covid 19 pandemic? How on earth will successive leaders of our nation kowtow to the world bank/IMF directives without due diligence on the negative impact such directive will have on the citizen of this country? Saka asked Rhetorically.

Echoing similar views, the Coordinator of ACIS-M, Comrade Akin Asifat noted that Nigerian students are prepared to take the future in their own hands, adding that it is time to let the government realize that Nigeria belongs to all Nigerians.

He also called upon other bodies to support the move to resist the anti-people policies of the Buhari-led government while maintaining that the government has failed in its promises to provide social welfare for all the citizens.

According to him, “Nigerian people, the poor working masses with Nigerian students are ready to take the future in their hands and say enough is enough. There is no aspect of the economy in Nigeria that the poor can hang their heads. Electricity in Nigeria hike, fuel price hike, stamp duty.

“Everything in Nigeria is poor. It is time for us to say it loud and clear even when you are enjoying crumbs from the table of those at the statehouse over there. We have to let everybody know that nobody is safe in this kind of noxious, wicked, anti-people policy of the most corrupted capitalist government of Buhari.