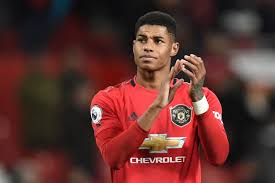 Manchester United forward Marcus Rashford will receive a ‘Panel Special Award’ as part of the 2020 BBC Sports Personality of the Year celebration.

The award is to recognise his enormous off-field work in fighting child food poverty in the UK and forcing the government to take action.

Rashford will not be in line for the main Sports Personality of the Year award but will be the first-ever recipient of the gong believed to have been created just for him.

Though the 23-year-old enjoyed a strong season with United in 2019/20, the BBC’s guidelines acknowledge that the winner of the Sports Personality of the Year must have ‘captured the UK public’s imagination’.

He must also have made an impact ‘beyond the sport in question’.

The corporation, however said, it is sticking firmly to the notion of solely ‘sporting achievement’.

The shortlist for the main Sports Personality of the Year award, which was won by cricketer Ben Stokes in 2019, will be released closer to the ceremony on 20 December.

Bach says ‘no Plan B’ for Tokyo Games – Kyodo