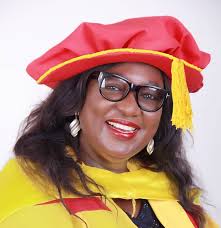 Prof. Florence Banku-Obi has been sworn in as the 11th substantive Vice Chancellor of the University of Calabar and the first female to head the institution 45 years after its establishment.

Banku-Obi was sworn in on Tuesday in Calabar by Sen. Nkechi Nwaogu, Pro-Chancellor and Chairman of University of Calabar Governing Council.

It was reported that Banku-Obi, who is a Professor of Special Needs Education in the University, was appointed VC of the institution on Sept. 10.

She took over from Prof. Zana Akpagu, whose tenure expired on Nov. 30 after a period of five years.

The new Vice Chancellor expressed her unflinching commitment to a culture of academic excellence through quality research output, teaching and learning, scholarly publications and visibility and integrity of examination result.

She pointed out other areas of her commitment would include result processing and handling and the reinforcement of quality assurance mechanism at all spheres, including the departmental level.

She said that during her tenure as VC of the institution, accountability, transparency, truth and courage would be her watchwords.

She gave assurance that her tenure would also witness staff motivation for optimum productivity.

“As a psychologist, I shall deploy the concept of effective motivation, which connects the personal goals, and needs of the worker to our goals as a University.

“I expect attitudinal change from all categories of staff in terms of commitment to their schedule of duty in appreciation of the new administration disposition to welfare.

“Let it be clear to all, that, this administration will effectively use the the carrot and stick approach to increase productivity and I will maintain a cordial working relationship with the various unions on campus.

“Therefore, I implore the leadership of the various university-based labour unions, while constructively engaging management on genuine issues bothering on their members welfare to also make time to counsel their members to desist from unwholesome practices that will pinch administration against staff,” she said.

She promised to institute a “VC’s Honours List” to encourage students who are doing very well in their programme of study to continue to aim at the attainment of the highest level of performance at the end of their study.

“Towards this end, an undergraduate student whose performance at the end of a session, on the basis of his/her Cumulative Grade Point Average place him/her in the First Class Honours grade of at least 4.5 grade is to be recognised through placement in the VC’s Honours List and will also reflect in the transcript,” she said.

Earlier in her speech, Nwaogu said that her robust engagements with Banku-Obi after the selection exercise in September further deepen her confidence in the power of her vision, resourcefulness, competence and passion to provide the leadership that will produce concrete result.

She charged her to develop the institution by providing the needed critical infrastructure for scholarship, repositioning of the institution with excellence and also cater for the welfare of its teeming staff and student.

“I am very optimistic that she will succeed, and to succeed, your support is pivotal, without which moving the University will only remain a mirage.

“I am conscious of the weighty responsibility that history has placed on her shoulder as the first female VC of Unical affer 45 years of its existence.

“Prof. Obi is ready to bring all that God endowed her in scholarship, mortherliness, entrepreneurial, advocacy and pragmatic leadership for the growth of the University.

“To be on the right side of history, we must rise to the duty of committing ourselves to the task of building the University by playing whatever role is expected of us with seriousness and honesty,” she said.

She charged members of the University community to encourage and support the new VC and her administration to provide the leadership that would deal with the problems at hand.