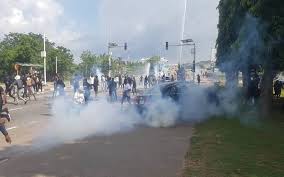 …as Davido secures release of some arrested protesters

Barely 2 hours after Mohammed Adamu, the Inspector-General of Police announced on Sunday afternoon announced the dissolution of the Special Anti-Robbery Squad(SARS), officers of the Nigerian Police force have continued to violently disperse protests.

Eyewitness reports on Sunday say that the police officers stationed in front of the Nigeria Police force headquarters in Abuja attacked protesters with tear gas, water cannon and bullets.

Nigerians, mostly the youths, had taken to the streets of major cities to protest SARS’ brutality while the hashtag “ENDSARS” has trended for days on social media.

But disbanding the unit on Sunday, the IGP ordered all officers and men of the now defunct Special Anti-robbery Squad to be redeployed with immediate effect.

According to the Adamu, the dissolution of SARS was in response to the yearnings of Nigerians.

The IGP noted that the Force was not oblivious of the ever present need to combat armed robbery, kidnapping and other violent crimes in the country which was before now the core mandate of the erstwhile Squad.

He assured that a new policing arrangement to address anticipated policing gaps the dissolution of SARS would cause has been evolved and shall be announced in due course.

Meanwhile, the IG said, “as part of measures to prevent a re-occurrence of events that gave rise to the dissolution of SARS, a Citizens’ and Strategic Stakeholders’ Forum is being formed to regularly interface with Police leadership at all levels and advise on police activities as they affect the general public.

“In addition, the Force is constituting an Investigation Team which shall include Civil Society Organizations and Human Rights Bodies to work with the Police in investigating alleged cases of human rights violations. The measure, the IGP believes, will enhance transparency and accountability in police services as well as providing a system of deterrence for erring police officers whose action clearly violates the rights of the citizenry.

“The IGP appreciates and commends all citizens particularly those who genuinely express their concerns for a better policing orientation in an organized, patriotic and civil manner. He reaffirms the determination of the Force to maintain law and order across the country.

Protesters who were on site took to their social media handles to express their anger and displeasure at the act of the police officers despite the presidential directives.

Here below are some of the reactions from Nigerians:

@DavidHundeyin: Just staged a PEACEFUL March to the Force HQ and got badly teargassed for the 2nd time today, after which we were hit by a water cannon and then multiple live bullet rounds into the air.Just after this video, they came after us on foot brandishing horsewhips. I had to hide behind a shop and flatten myself to the floor.

Kelvin Odanz @MrOdanz: The police attacked us with tear gas, water cannon and bullets in the morning. This afternoon they are attacking us again for a peaceful match to the police force HQ.

We are regrouping to go back in the evening. Jesus rose on the third day

LIVE BULLETS! 5 persons have confirmed that the Nigerian Police are shooting at #EndSARS protesters in Abuja.IGP, @NigeriaPolice ask your men to stand down if your promises to #EndSARS are genuine

@selemaenang tweeted: The police has followed us to GANA STREET IN MAITAMA POURING WATER, TRYING TO BEAT US. We’re parked infront of a Supermarket in Maitama. DO NOT STOP THIS PROTEST! YOUR COUNTRY HAS DONE NOTHING AND THIS IS A FOKKEN LIE! We were on our way to the Nigerian police HQ to meet the IGP and those animals in police uniforms attacked us with teargass and water cannon again. #ENDSARS.

The music star who tweeted on Saturday, October 10, 2020, about his planned trip to Abuja, joined other protesters as they moved around the streets of Nigeria’s capital.

Davido didn’t just protest as he helped secure the release of some of the protesters who had been arrested by the police authority.

The music star joins the list of celebrities who have come out to lead or join the #EndSars protests across the country and abroad.