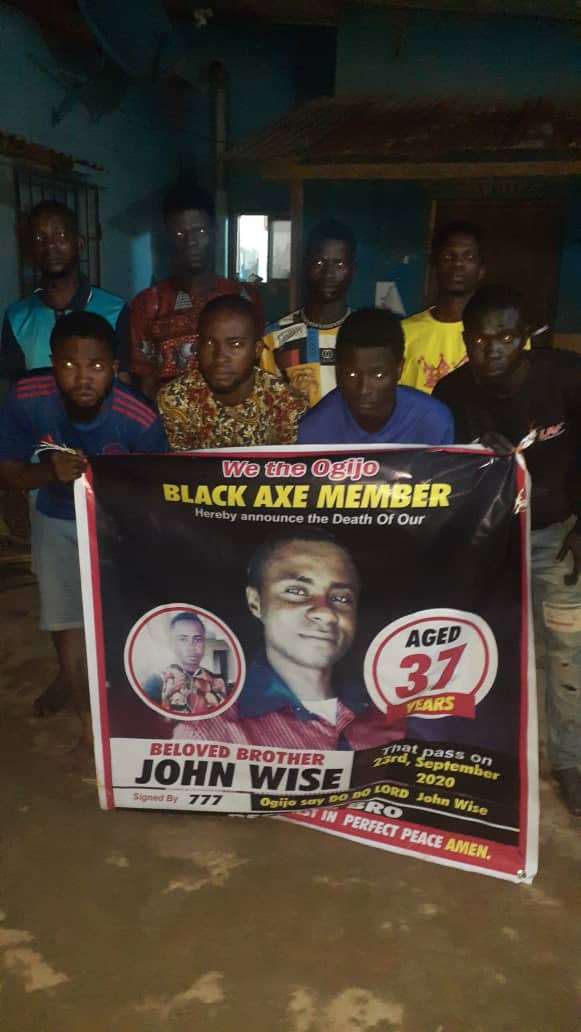 Ogun State police command has arrested eight members of dreaded Black Axe cult group fondly called Aiye at Ogijo in Sagamu local government area of the state during the funeral of one of them.

The alleged cultists were said to have been arrested following a report lodged at Ogijo police station where a 16yr old boy, Onome Iduru was rushed to after being shot in the stomach by the cultists during their procession in honour of their departed colleague.

The alleged cultists after shooting the16 years old Onome Iduru were said to have dispossessed him of phone and also went ahead to unleash terror in Ogijo community.

Receiving this criminal report, the DPO Ogijo division, CSP Muhammed Suleiman Baba led his men to the scene where eight members of the deadly group were arrested after serious encounter with the police.

A banner designed with the cult group insignia to announce the death of their member was recovered from cultists while the boy shot by the cultists in the stomach was taken to hospital for medical attention.

The Commissioner of Police, CP Edward Awolowo Ajogun has however ordered the transfer of the suspects to state criminal investigation and intelligence department for further investigation.

Ajogun has therefore warned that any group or individual who engaged in any activity capable of undermining the peace of the state will be dealt with in a very decisive manner.