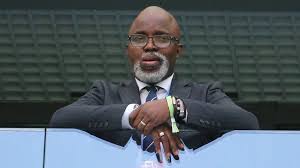 The President, Nigeria Football Federation (NFF), Amaju Pinnick, has handed over a 250-seater capacity mini stadium and a volleyball court he built in Hussey College, Warri, to the school management.

Pinnick who also renovated two classrooms in the college said the gesture was to improve learning and sporting activities in the school where he graduated in 1988.

According to him, Hussey College is known for sporting activities and academic excellence.

“Hussey College is the only school in Nigeria that has produced the highest number of ex-internationals for the Super Eagles with the likes of Jossy Dombraye and Michael Obiku, among others.

“Today, that is becoming history and it is on that reason that we decided to build a football pitch here.

“We would have completed it with flood light, but we need to improve on security in the college. In 2021, we will install flood light in the school.

“We are going to take charge of the maintenance of the turf as long as we can. We have also offered scholarships to the best 15 students of Hussey College.

Gov. Ifeanyi Okowa of Delta who was represented by his Chief of Staff, David Edevbie, said that Pinnick had set a pace for the state government.

“This is probably one of the best pitches in Warri at the moment,” he said.

Also, the Chairman of Brownhill Foundation, Andrew Bekederemor, appealed to the state government to partner the foundation to improve on the quality of life of the people.

Responding, the Principal of Hussey College, Mayuku-Edukugho Abeji, thanked the NFF president for the gesture and promised to make the best use of the facilities.

Abeji appealed to other alumni of the college to help erect a perimeter fence round it to protect the facilities.

Highlight of the event was a novelty football match between the old boys of the college and some ex-internationals.

The match ended one goal a piece.

Both goals were scored in the second half of the game.

In attendance were some members of the NFF including, Augustine Eguavoen, Joseph Yobo and Super Eagles Coach, Gernot Rohr.