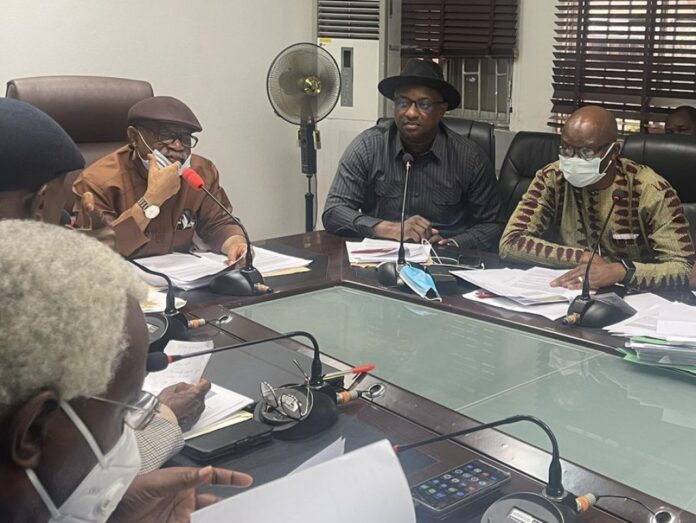 …You are guilty of corruption — Buhari to ASUU

…We are organised, unshaken – ASUU

The Federal Government on Tuesday launched multiple strokes on the Academic Staff Union of Universities (ASUU) approving the registration of a rival group, the Congress of University Academics (CONUA), while accusing the Union of corruption.

Meanwhile, ASUU has maintained its stand not to shift grounds, stating the whip of the Federal Government is inconsequential to its stand.

The Union in reaction to the Federal Government’s move on Tuesday swiftly said as a disciplined and focused Union, it is unperturbed by the actions of the Government.

Approving the alternative Union on Tuesday, the Federal Government quickly directed members of the Union to resume work without further delay.

The new university based academic union was on Tuesday presented with a Certificate of Registration at the Conference Room of the Ministry of Labour and Employment.

Recall the group had opposed ASUU’s ongoing strike which began on February 14 and has been battling to gain recognition from the Federal Government since 2018.

Also approved on Tuesday was the registration, as a trade union, the Nigerian Association of Medical and Dental Academics (NAMDA).

The Minister of Labour and Employment, Chris Ngige, who presented the letters and copies of the Trade Union Act to the groups at his office in Abuja said, “The Federal Ministry of Labour and Employment in the discharge of her mandate in the management of Employment Relationships and the Administration of Trade Unions to ensure harmonious industrial relations system in the nation has decided to to approve the registration of two (2) more Trade Unions in the Nigerian University Academic Sub Sector.”

According to the Minister, the two unions would operate along with ASUU.

“The University Sub-Sector is a major development plank of any Nation’s Socio-economic growth. Knowledge they say is Power.

“It may be noted that Section 3(2) of the Trade Unions Act, CAP. T14, Laws of the Federation of Nigeria (LFN) 2004 gives the Honourable Minister of Labour and Employment powers to regroup an existing Trade Union of Workers or Employers. The Section under reference states.

“No combination of workers or employers shall be registered as a Trade Union save with the approval of the Minister on his being satisfied that it is expedient to register the Union either by regrouping existing Trade Union, registering a new Trade Union or otherwise howsoever.

“In view of the above, I Senator (Dr.) Chris Nwabueze Ngige, in the exercise of the power conferred on me as the Honourable Minister of Labour & Employment, do hereby approve the registration of Congress of Nigeria University Academics (CONUA), and Nigeria Association of Medical & Dental Lecturers in Academics (NAMDA).

“These Associations will exist side by side with ASUU in the Nigerian Universities in the spirit and tenets of the International Labour Organisation (ILO) Core Convention nos. 87 & 98 which are respectively on Freedom of Association and Protection of the Right to Organise, and the Right to Organise and Collective Bargaining; as well as the enthronement,” he said.

The Minister decried that despite series of engagements to resolve the trade dispute by the Federal Government, classrooms in the nation’s Public Universities have been shut and students kept at home by the strike action of ASUU.

“In line with the provisions of the Trade Disputes Act, CAP. TS, Laws of the Federation of Nigeria, 2004, this Strike was apprehended & Conciliations were done in this Ministry on February 22, 2022, and March 1, 2022.

“However, all efforts at conciliation failed resulting in the transmission of the trade dispute to the National Industrial Court of Nigeria (NICN) for adjudication in line with the statutory trade dispute resolution processes.

Ngige said the two unions applied for registration since 2018 due to irreconcilable differences as they do not believe in recurring strikes as the solution to every welfare agitation.

He said, “They also accused the ASUU executive of non rendition of account of Incomes and Expenditure for years. The Ministry of Labour and and Employment set up a committee to look into the merit of their application. The committee saw merit in the application and recommended approval for the registration of the Association by the Registrar of Trade Unions (RTU) since 2020. But for the advent of COVID-19 pandemic and the recurring ASUU Strike, this would have been done.

“NAMDA, like their colleagues in CONUA, they had applied for Registration as Medical Teachers in the University system under various groups.

“They include those Medical Doctors doing Pre-clinical teaching of basic medical courses and Honorary Consultants teaching clinical students in.”

Ngige disclosed that the new unions will be entitled to all rights and privileges accruing to such academic associations including but not limited to receiving check off dues of their members in accordance with Section 17 of the Trade Unions Act, membership in the Nigerian University Pension Management Company Limited (NUPEMCO) and being on CONUAS Salary Structure/Scheme.

“They are equally entitled to Earned Academic Allowances (EAA) and all other allowances attached thereto,” he said.

While receiving the letter of approval on behalf of the union, CONUA National Cordinator, Dr. Niyi Sunmonu described the registration of the body as historic.

In a statement, Sunmonuin said, “The registration of the Congress of University Academics (CONUA), as a Trade Union in the Nigerian university system, is monumentally historic.

“The hurdles we have faced to get here, since 2018 when we submitted our application for registration, have been seemingly insurmountable.

“The registration is therefore the validation of the power of the human will. It asserts the value of courage, initiative, focus, tenacity, patience, forbearance and persistent positive thinking.

“The very strict and dispassionate review of our application brought out the best in the membership of the Union.

“We regard the registration of CONUA as a sacred trust, and pledge to reciprocate by devoting ourselves unceasingly to the advancement of university education in this country. We would make the details of our programmes available to the public in due course.”

…You are guilty of corruption — Buhari accuses ASUU

Meanwhile, President Mumammadu Buhari, on Tuesday, hit hard on ASUU, accusing the Union of lecturers of being complicit of corruption in the tertiary education sector of the Country.

President Buhari made the accusation in his address during the fourth National Summit on Diminishing Corruption in the Public Sector, jointly organised by the Independent Corrupt Practices and Other Related Offences Commission (ICPC), office of the Secretary to the Government of the Federation (SGF) and Joint Admission and Matriculation Board (JAMB) at the Banquet hall of the Presidential Villa, Abuja.

Buhari also accused the lecturers of deployment of disguised terminologies to perpetrate corruption in the ivory towers, a development he said impinges the fight against the menace in the education sector.

He accused management of tertiary institutions of not being transparent in the expenditure of the Internally Generated Revenue (IGR), asking stakeholders and the media to beam their searchlight on it.

According to the President, “Incessant strikes, especially by unions in the tertiary education sector, often imply that government is grossly underfunding education.

“But I must say that corruption in the education system from basic level to the tertiary level has been undermining our investment in the sector and those who go on prolonged strikes on flimsy reasons are no less complicit.

“Government and stakeholders in the educational sector are concerned about the manifestation of various forms of corruption in that sector.

“I am aware that students in our universities, for example, use different terminologies to describe different forms of corruption they experience on our campuses.

“Sexual harassment has assumed an alarming proportion. Other forms of corruption include pay-roll padding or ghost workers, lecturers taking up full time appointments in more than one academic institution, including private institutions, lecturers writing seminar papers, projects and dissertations for students for a fee, and admission racketeering, to mention only the most glaring corrupt practices.”

The President, however, commended the ICPC for its due diligence in investigating and prosecuting sexual harassment as abuse of power in the country’s educational institutions.

He assured that “Government will continue to fund education within realistically available revenue” while urging stakeholders, including the media, to “equally advocate transparency in the amount generated internally by educational institutions and how such funds are expended.”

President Buhari further stated that, “Corruption in the expenditure of internally generated revenue of tertiary institutions is a matter that has strangely not received the attention of stakeholders in tertiary education, including unions.”

He called on “stakeholders to demand accountability in the administration of academic institutions and for unions to interrogate the bloated personnel and recurrent expenditure of their institutions.”

He implored “unions to work with the government to put faces and identities to names on the payroll.”

Meanwhile, the President, on Tuesday met with the Speaker, House of Representatives, Femi Gbajabiamila and the Deputy Speaker of the House, Ahmed Wase, at the Presidential Villa, Abuja for discussion over the lingering strike.

The meeting, which started at 3:00p.m., was scheduled to feature the lawmakers presenting to President Buhari their recommendations from meetings they had with stakeholders on the strike.

Recall, speaking at the last meeting of the House Leadership with stakeholders comprising members of ASUU and representatives of the Federal Government, Gbajabiamila had said the report from the engagement would be presented to the President to assess the situation from an informed second option to address the stalemate.

ASUU strike embarked on February 14, is headed for eight months. Other associations such as the Senior Staff Association of Nigerian Universities, Non-Academic Staff Union of Allied and Educational Institutions and National Association of Academic Technologists later joined up, shutting down their activities in universities nationwide.

While SSANU and NASU have since called off their industrial action, ASUU is still slogging it out with the Federal Government over unresolved issues.