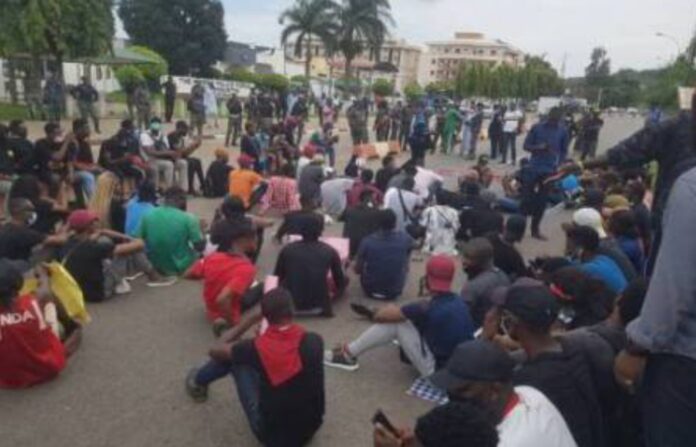 Despite the 24-hour curfew imposed by the State Government of Osun, residents and protesters shun the order as they flood major streets in the capital city, Osogbo.

It will be recalled that the state government on Tuesday through the SSG, Wole Oyebamiji, ordered a 24-hour curfew in an attempt to curtail the uproar that may be unleashed by criminals and hoodlums who might have infiltrated the #EndSARS protest in the State.

This is just as Governor Oyetola and his convoy escaped being lynched by miscreants while he was addressing protesters in Osogbo last Saturday.

On Wednesday, the protesters and concerned youths trooped to the streets as early as 7:30 am to mount roadblocks on major roads across the metropolis.

The EndSARS protesters also resumed their protest at Olaiya junction around 8:00 am despite the imposed curfew.

Meanwhile, several soldiers stormed Olaiya, the hot spot of the protesters in six Hilux vehicles, but they were stopped by the protesters.

Addressing the protesting youths, one of the troops who had earlier joined the protesters with the Nigerian flag in his hand said they were not on ground to launch an attack on the protesters.

He stated the need for the protesters to obey the executive order of the state governor, stressing that they will not attack the protesters.

While urging the youths to maintain peace, he advised them against looting and damaging public properties.