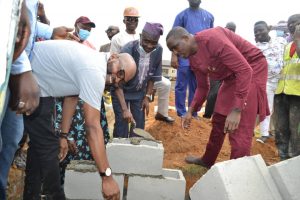 The Oshodi-Isolo Local Government Council in Lagos State has started the construction of a general hospital, its Media Officer, Babajide Dada, stated on Wednesday.

He said that the council chairman, Bolaji Ariyoh, who laid the foundation stone of the hospital and doctors’ quarters on Tuesday, assured the people of its commitment at ensuring the provision of adequate healthcare services.

“With the ultramodern general hospital, we can be rest assured that quality health services will be within the reach of the people; the new hospital and the existing one would be equipped to serve the people,’’ Ariyoh said.

Ariyoh also seized the opportunity to promise immediate renovation of classrooms and administrative buildings at Ewututun Primary School as well as provide it with modern toilets.

He implored residents to cooperate with the contractors to enable them to deliver speedily on the job.