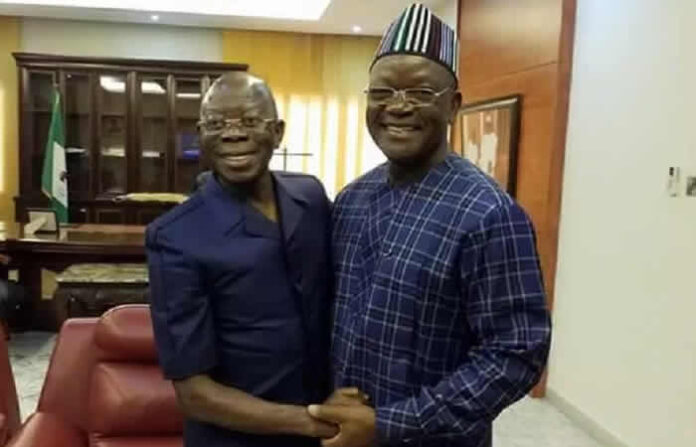 The former Chairman of the All Progressives Congress, (APC), Comrade Adams Oshiomole on  Tuesday sought for an out-of – court settlement in the N10 billion libel suit instituted against him by Benue State governor, Samuel Ortom.

Oshiomole in the early hours of the day of the suit had  filed 6 preliminary objections which the court resolved all in Governor Ortom’s favor.

Governor Ortom had filed the libel suit against the former APC chairman over his comments against him in an APC sponsored press conference held on July 27,2018, wherein Oshiomhole accused him of having a hand in the death of two Catholic priests and other parishioners at Mbalom Community, Gwer East local government on the grounds that one of the priests had preached a ‘very critical sermon’ against him (the Governor).

When the case resumed today for definite hearing, counsel to Governor Samuel Ortom, Samuel Irabor submitted that he was ready to call his witnesses, but Oshiomole’s counsel had informed him earlier that they have considered putting up a retraction of  the publication and it will be ready within a week.

He continued that in such circumstances, he was applying for another date to take a look at the terms of settlement canvassed by Oshiomole.

“That is the true position of the matter. We have met and we are drawing out terms of settlement.

The Presiding judge, Justice Augustine Ityonyiman , after listening to both parties, adjourned the case to October 29, for report on the out-of-court settlement.

Governor Ortom in the suit among other things, averred that Oshiomhole allegedly assassinated his character and damaged his reputation when in an APC sponsored press conference held on Friday July 27, 2018, Comrade Oshiomhole accused him of having a hand in the death of two Catholic priests and other parishioners at Mbalom community on the ground that one of the priests had preached a ‘very critical sermon’ against him (the Governor).

Some of the reliefs sought by Governor Ortomin included the N10 billion suit against Oshiomole include “a declaration by the court that the Defendants’ allegations and publication of July 27 against him are false, mischievous, unsubstantiated, defamatory and libelous.

“An order directing the defendants to publish simultaneous retractions/apologies in respect of the said libelous publication against him in the Sunday editions of 10 National Dailies circulating within Benue State as well as paid advertorials to the same effect on the prime time beats of the Nigerian Television Authority, Channels Tv, TVC News, African Independent Television, Independent Television (ITV), Benin, Radio Nigeria, Radio Benue and Harvest FM.”

“An Order of Perpetual Injunction restraining the Defendants, their officers, privies, assigns, surrogates or agents whosoever called from further defaming and libeling the Plaintiff’s character and reputation and any other order(s) that the Court may deem fit to make in the circumstance.”