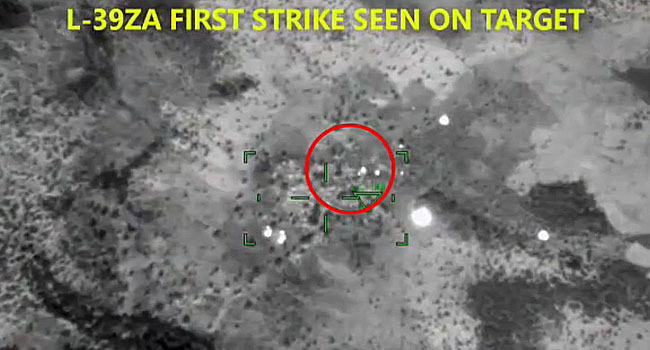 In continuation of the intensive air interdiction missions being conducted as part of subsidiary Operation WUTAR TABKI, the Air Task Force of Operation LAFIYA DOLE has neutralized several Boko Haram Terrorists (BHTs) and destroyed some of their structures at Tsilala near Kaza in the Dikwa general area of Borno State.

According to him, the Nigerian Air Force (NAF) fighter jets and helicopter gunships dispatched by the Air Task Force took turns in engaging the location scoring accurate hits in the target area, resulting in the neutralization of several BHTs as well as the destruction of some of their structures.

It would be recalled that on October 15,2020, the Air Task Force of Operation LAFIYA DOLE had neutralized several Islamic State of West Africa Province (ISWAP) elements and destroyed their hideouts at Tudun Wulgo and Tumbun Gini on the fringes of Lake Chad in Borno State. This was also achieved through air strikes executed as part of a new subsidiary Operation, tagged “WUTAR TABKI,” after series of aerial surveillance missions had indicated that the two locations, with structures and logistics items camouflaged under the dense vegetation, were being used as staging areas where some ISWAP leaders and their fighters meet to plan and launch attacks.

The Nigerian Air Force (NAF) fighter jets and helicopter gunships were engaged for attack of  the two locations. The attack aircraft scored devastating hits in the target areas, destroying some structures and neutralizing several of the terrorists.