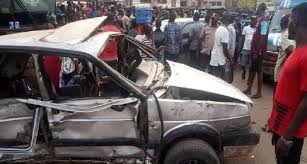 One male adult has been confirmed dead in an accident involving four vehicles near Tarzan Junction, along Onitsha-Awka expressway, Onitsha, in Anambra on Friday night.

Kumapayi said that the accident, which occurred at about 11.p.m., was caused by loss of control.

The FRSC boss said that a four people, comprising three male adults and one female adult, were involved in the accident which claimed one life.

“According to eyewitnesses, the driver of the Volkswagen vehicle lost control of the vehicle and rammed into three other vehicles, leading to his death.

“The corpse of the dead victim was taken to Iyienu hospital and deposited in the morgue by FRSC rescue team from Nteje Unit Command, while investigation to unravel the cause of the crash has commenced, ” he said

While condoling with the families of the dead, Kumapayi urged motorists to ensure regular maintenance of their vehicles and drive with caution.