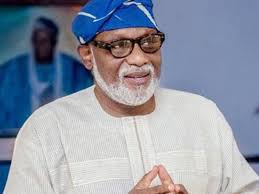 The ancient town of Owo witnessed very violent political tussle between the supporters of two leading candidates for the October 10, 2020 governorship election, the incumbent, Rotimi Akeredolu of the All Progressives Congress (APC) and Eyitayo Jegede of the Peoples Democratic Party (PDP).

Our reporter gathered that no fewer than ten persons sustained various degrees of injuries, several vehicles, motorcycles and other properties were destroyed by political thugs who clashed in Ipele, Owo local government of Ondo State.

The two major political parties, the Peoples Democratic Party (PDP) and the All Progressive Congress (APC) however traded blame.

The Peoples Democratic Party (PDP) alleged that the campaign team of its Ondo governorship candidate, Eyitayo Jegede, was attacked in lpele, Owo area of the state by thugs loyal to governor Rotimi Akeredolu. It alleged that policemen in the town supervised the attack on the campaign train.

A statement by the Eyitayo campaign organisation signed by its Head, Media Research, Kayode Fasua in Akure said that “the APC-led government of Mr. Rotimi Akeredolu has continued its pursuit of promoting violence in this election. Fasua said that “Our campaign team was yet again attacked by members of the APC in Ipele who had blocked access to the palace of the king and the maternal home of the PDP candidate in a bid to deny him access to both places earlier scheduled to be visited by Mr Eyitayo Jegede SAN.

“Prior to our entry into Ipele, touts and miscreants under the APC had unleashed terror on our members with several casualties.

“These miscreants were dispersed by a joint team of police and NSCDC officers.

“The DPO of Ipele is alleged to have not only supervised the assault but also arrested six members of the PDP including the youth leader whose hands had been broken by the attackers and beaten to a coma.

“We would like to warn the APC and its outgoing government to know very clearly that no single individual has the monopoly of violence.

“While we are very cautious about the broad implication of promoting violence in this election, we however would not be intimidated in our pursuit of victory in at the polls.

“For the record, the Divisional Police Officer in Ipele Police Station is hereby reported to the police authorities for gross negligence of his duties to protect the people and collusion with the APC to harass and intimidate our members.

“We also call for the immediate and unconditional release of our members who were arrested and are being detained on the orders of the DPO and may be charged by the police on trumped-up charges.

“We also call on the police authorities to warn its officers to abide by the rules and not to serve as agents of provocation in the hands of this government.”

On its part, the Akeredolu campaign organisation said it was the thugs of the PDP candidate, Eyitayo Jegede that “unleashed coordinated attacks on the innocent people of Ipele and Ijebu in Owo local government area.”

Spokesperson, Richard Olatunde Olabode said, “Our people were traumatized with the sound of gunshot sporadically by Eyiyato Jegede thugs in Owo today. “Earlier today, on our way to Akoko Southwest in continuation of our local government campaign in Akoko Southwest, we noticed that all our billboards and banners have been destroyed at Emure Junction.

“Sensing that the PDP might be in the main town, Governor Oluwarotimi Akeredolu SAN ordered his campaign convoy to take another route out of the town.

“Despite this, Eyitayo Jegede and the PDP still went ahead to cause mayhem in Owo by attacking innocent members of the public and anyone with APC or Akeredolu branded caps or T-Shirt.

“No fewer than 20 cars were destroyed and many innocent people of Ipele and Ijebu Owo injured. Motorcycles were burnt and the streets of Ipele littered with shell of bullets.

“We want to place it on record that Eyitayo Jegede is drumming beat of war. We are preparing for an election that will be determined by the people of this state. The people of Owo are oppressed and victimized by the PDP today.

“This intimidation to scare the people of Owo from coming out to vote massively for their son will not work.

The people are resolved to support Governor Oluwarotimi Akeredolu.

“We must also note that the PDP went berserk when no one received them into Owo. They obvious prepared to come into the ancient town for attacks and violence not to campaign. He added that;

“We are calling on the security agencies to wade in and investigate this ugly incident. Governor Akeredolu has reiterated that no election is worth the lives of the people.

“As we speak, there are scores of Owo people in the hospital in critical condition.”