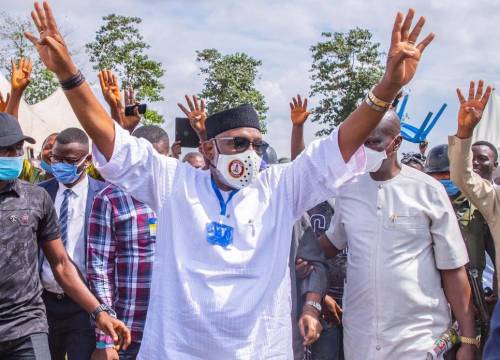 The Independent National Electoral Commission (INEC) has declared Gov. Oluwarotimi Akeredolu, candidate of the All Progressives Congress (APC), as the winner of the governorship election held on Saturday in Ondo State.

Prof. Abel Olayinka, the Returning Officer of INEC, who is also the Vice Chancellor, University of Ibadan, said that Akeredolu got 292,830 votes to defeat Eyitayo Jegede of Peoples Democratic Party (PDP) who got 195,791 votes while Ajayi Agboola of Zenith Labour Party (ZLP) got 69,127 votes.

Olayinka explained that Akeredolu secured the highest number of votes among other candidates and scored 25 per cent in all 18 Local Government Areas (LGA’s).

“Oluwarotimi Akeredolu secured the highest number of votes among the 17 contestants. He was expected to score 25 per cent of votes in 12 LGA’s, but he scored 25 per cent in all 18 LGA’s in the state.

“Moreover the margin of lead, that is the difference between his votes and the candidate who came second, is higher than the number of cancelled votes.

“So, consequently, having satisfied the requirements of the law, I hereby declare Oluwarotimi Akeredolu as the winner, and is hereby returned elected,” he said.

Akeredolu, who was seeking for a second term as the governor of Ondo state, defeated Jegede with a margin of 97,039 votes.

Akeredolu, won in 15 of 18 Local Government Areas (LGAs) of the state, while Jegede won the remaining three LGAs. Ajayi Agboola, candidate of the Zenith Labour Party, who is the present deputy governor of the state, did not win any LGA, and came a distant third.

Eyitayo Jegede of the  Peoples  Democratic Party  (PDP) won in Akure South, Akure North, and Ifedore LGAs, while ZLP did not win in any LGA.

The breakdown of the results showed that Akeredolu scored 13,278 votes in Ile Oluji/Oke-Igbo Local Government area to beat Jegede and Ajayi, who polled 9,231 and 1,971 votes respectively.

In Irele Local Government area, Akeredolu won with 12,643 votes, followed by Ajayi, who polled 5,904 votes ahead of Jegede, who scored 5,493 votes.

Akeredolu also won in Akoko North-East Local Government area with a total of 16,572 votes, while Jegede and Ajayi tagged along with 8,380 and 3,532 votes respectively.

Similarly, the APC candidate won in Akoko South-West Local Government area with 21, 232 votes, followed by the PDP candidate, who polled a total of 15,055, while their ZLP counterpart scored 2,775 votes.

The story was not different in Akoko North-West Local Government area, where Akeredolu garnered 15,809 votes, with Jegede having 10,320 votes and Ajayi 3,221.

Akeredolu also won in Ondo East Local Government area with 6,485 votes, closely followed by the candidates of the PDP and the ZLP, who polled 4,049 and 3,221 votes respectively.

It was a landslide victory for Akeredolu in his Owo Local Government area, where he garnered a total of 35,957 votes to beat Jegede of the PDP, who scored 5,311, and Ajayi of the ZLP, who scored 408 votes.

The APC candidate also recorded victory in Akoko South-East Local Government area with a total of 9,419 votes over candidates of the PDP and ZLP, who scored 4,003 and 2,004 votes respectively.

It was, however, a different story in Akure Local Government area, where Jegede of the PDP recorded a resounding victory with a total of 47,627 votes to beat Akeredolu of the APC, who polled 17,277 and Ajayi of the ZLP.

The candidate of Zenith Labour Party (ZLP), Agboola Ajayi garnered 32,057 votes to come a distant third In the meantime, Akeredolu has described his reelection as the reward for hard work, dedication, focus, honesty and patriotism.

Akeredolu made the assertion in Akure on Sunday shortly after the Independent National Electoral Commission (INEC) declared him winner of the election which he won by a margin of 97,039 votes.

He said that his reelection was an indication of his administration’s performance in the last three and half years.

The governor also said the outcome of the election was an eloquent testimony of his acceptance by the people of Ondo State.

“It affirms that the confidence reposed in our administration remains unshaken. It is also a challenge to us for rededication to service in the interest of our people. On this, we shall not relent.

“We set out on the first leg of this political adventure with the determination to make the whole state our constituency.

“We have not relented on our mission to bridge the huge infrastructural deficit inherited on assumption of office.

“We hold the axiom as evident that the welfare of the people should be the only justification for the existence of government.

“We have allowed this admonition to be the guiding principle of governance. We are elated to receive a scorecard through this state-wide plebiscite,” he said.

The governor also said the few dissenting voices of protest were heard loud and clear, while all genuine grievances would be addressed.

He reaffirmed his commitment to continue to focus on the development of the state, with the people at the centre of all decisions.

“We will proceed with our administrative style of ensuring transparency and accountability.

“We are determined to set our state, progressively, on the path of real development. Self-reliance is attainable. Our state has no business with poverty.

“Sincere, purposeful and focused leadership should have little difficulty in harnessing the vast resources, both human and natural. We will put in everything to justify the trust reposed in us,” he said.

Similarly, the All Progressives Congress (APC) has applauded the people of Ondo State for coming out enmasse to re-elect Gov. Rotimi Akeredolu, the state’s incumbent governor for a second term in office.

The party in a statement issued by Mr Yekini Nabena, its Deputy National Publicity Secretary, on Sunday in Abuja said it would continue to ensure that the will of the people prevailed at all elections.

“As a party, we thank the Ondo State electorate for voting for good governance, industrialisation, security, empowerment and general welfare of the state.

“We will continue to advocate for and support safe, free and credible elections that guarantee that valid votes count and the people’s will prevail,” he said.

Nabena thanked President Muhammadu Buhari as leader of the party and Gov. Mai Mala Buni as Chairman of its Caretaker and Extra-Ordinary National Convention Planning Committee for supporting Akeredolu, the party’s governorship candidate at the election.

“Gov. Akeredolu’s re-election is indeed testament to the inclusiveness, genuine reconciliation and peace the Gov. Mai Mala Buni-led APC Caretaker Committee has ensured among party ranks in Ondo and other chapters of the party in general,” Nabena said.

The APC spokesman added that there was no vanquished now that the Ondo State governorship election was concluded and the people had decided.

He said what was needed now, was the general support for Gov. Akeredolu as he continued his work to return the state to its deserved and progressive standing among states in the country.

Also, President Muhammadu Buhari has congratulated Governor Akeredolu on his re-election as Governor of Ondo State for another four-year term.

The President lauded the resounding victory of the Governor at the election held on Saturday, October 10, 2020, noting that the votes garnered “show that one good turn surely deserves another.”

He thanked the people of Ondo State for keeping faith with their Governor, and the All Progressives Congress (APC), noting that “the people know the person and party that truly serves them, and have spoken in clear voice and unmistakable terms.”

He also gives kudos to the Independent National Electoral Commission (INEC) for organizing credible, free and fair election, and to security agencies which ensured that orderliness was enthroned and maintained.

The President urges Gov Akeredolu to be humble and magnanimous in victory, and serve the people of Ondo State even better than how he did in the first term, noting: “when you serve with heart and might, the people respond in like manner, and we can easily get to where we are headed as a country.”

Meanwhile,  a constitutional lawyer and  former General Secretary of the Labour Party (LP), Dr Kayode Ajulo has accused  all the major parties in the just concluded Ondo State  governorship election of vote buying.

In a statement issued in Lagos on Sunday, Ajulo, an indigene of Ondo, who said he monitored the election, alleged that the major political parties were all involved in influencing voters for the election, using money.

Ajulo said that the parties accusing others of vote buying during the election had no moral rights to do so as they were all guilty of it.

“The reported widespread vote buying during the election is true but it’s not restricted to one party.

“The case of vote buying was not only common to the major opposition. The three leading political parties in the election  tried in the game of outspending and overreaching one another,” he said.

He further explained that the only difference was the financial strategy, wit and coordination of  the political parties involved to facilitate the act.

He, however, said that failure of the Peoples Democratic Party (PDP) in the election was its inability  to ensure that it  presented a united front  for the election which negated its chances at winning.

According to the legal luminary, several governors within the umbrella of the PDP supported the Candidate of the Zenith Labour Congress (ZLP), Mr Agboola Ajayi, who left the PDP for the ZLP after the conduct of the PDP primaries,  where he lost to Eyitayo Jegede (SAN).

He also explained that the PDP would have had a better shot at winning if the party’s flag bearer had emulated the tactic of APC flag bearer who stooped to conquer by making peace with all his old and new adversaries.

“The PDP flag bearer failed to be on the same page with his former Principal, Dr Olusegun Mimiko, and this, unfortunately, helped Gov. Akeredolu’s  fortunes as PDP went into the election with a cracked wall,” he said.

Ajulo lauded INEC for the peaceful conduct of the election in the state while also enjoining the body to strive to do better in subsequent elections in the country.

He also urged all those who lost in the election to take it in good faith and join hands to take Ondo state to greater heights.