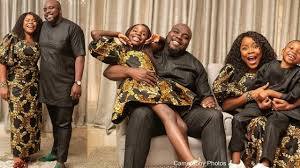 Family is everything that we cannot be independent of, and so Nigerian singer-songwriter Omawumi Megbele, known by her stage name Omawumi, is showing off hers to the world.

The 38 year old Delta State native of Itsekiri ethnicity is known for her ‘Megbele’ single which rocked the air waves back to back.

In her caption, she said : “The relationship between us is psycological…now who is psyco? and who is logical? 🤪😁 #toyforever #mrsyussuf”

The musician and her husband Tosin Yussuf officially got married in 2018 and they have two kids, after being together for a while.

She gained attention as the 2007 runner-up on West African Idols, reality TV show.