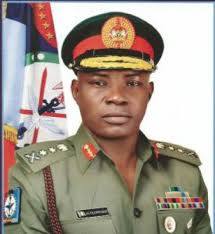 The Chief of Defence Staff, Gen. Gabriel Olonisakin has urged the officers and men of Armed Forces of Nigeria to imbibe the culture of adherence to code of conduct and asset declaration.

Olonisakin made the call at the opening of a 2-day workshop on Compliance with Asset Declaration and Code of Conduct for senior officers of the Defence Headquarters on Wednesday in Abuja.

He said the worshop was
important especially for senior officers, who, not only draw funds from government’s coffer, but were also responsible for the resources at their disposal.

According to him, every officer who holds a position of responsibility must also be accountable, adding that accountability is one
of the cornerstones in the fight against corruption which is one of President Muhammadu Buharis’s nine-point agenda.

He added that strict compliance with the provisions of the Code of Conduct was an opportunity to express a transparent stewardship in the day to day activities of mmembers of armed forces.

Olonisakin said he had always canvassed and pursued a system that emphasised judicious use of scarce resources to optimise value for the limited resources at their disposal.

He added that the procurement process had been reorganised to ensure transparency and full compliance with the guidelines of the Bureau for Public Procurement.
According to him, the implication of this is that we have been able to cut down waste and ensure judicious utilisation of funds.

“I enjoin all participants at this workshop to take advantage of the training alongside the presence of some staff members of the Code of Conduct Bureau to thoroughly understand the requirement for assets declaration.

“Let me also stress that you would be required to pass on the knowledge acquired during this workshop to your subordinates in your various departments and agencies,” he said.

Also speaking, the Chief of Defence Policy and Plans, AVM Charles Oghomwen, said the workshop would educate military officers on the code of conduct and other constitutional responsibilities as well as the consequences of non-compliance with the code of conduct for military personnel.

Oghomwen said it would also provide a practical guide on the completion of the asset declaration form and extant regulations on code of conduct of public office holders.

According to him, the workshop will begin with two lectures on “Code of Conduct Act and Code of Ethics in Government Business” and “Form Code of Conduct Bureau 1” which will dovetail into practical sessions.

“There will also be 2 papers on the second day covering “Conflicts of Interest: Issues and Challenges” and “Service Ethics and Problems on Non Compliance among Public Officers”.

“The programme will end with a wash-up and interactive session which will assist participants in the understanding and filling up the assets declaration forms,” he said.

Earlier, the Chairman, Code of Conduct Bureau (CCB), Prof. Isah Mohammed, said that abiding by the codes of conduct for public officers would save the nation huge resources spent on prosecution of cases.

Mohammed said that the workshop was one of the Bureau’s step at educating and sensitising public officers and general public on the code of conduct expected of all public officers.

He said the need for the application of punitive measures could be minimised or eliminated if public officials were abreast with with code of coduct, adding that resources that were usually expended on prosecution of cases could also be reduced.

INEC should use Ondo governorship, other bye-elections to increase its CV — Afenifere