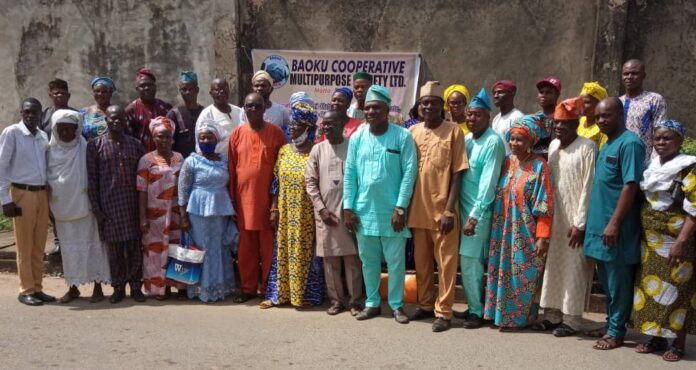 Olabinjo who made this known this week, in the event to commemorate the end of the year celebration of the Cooperative Society, wooed prospective members to join the organization.

The event which was monitored by Nigerian NewsDirect was graced by people from different works of life and individuals who affirmed Olabinjo’s commitment to alleviating poverty at the grassroots.

In his remarks, Olabinjo revealed the idea for the Cooperative was not only conceived on his 61st birthday, but also an offshoot of his long-term interest in helping the masses across various levels in the society.

He was of the view that aside from political leadership, the Cooperative Society and all other initiatives he pioneered are ways to give back to the society.

He said, “My vision of creating the cooperative is to look for a way of assisting people one way or the other. We don’t need to wait for the government before we empower ourselves. But many people are waiting for government empowerment which I don’t believe is totally right.”

Talking about human and resources management of the Cooperative Society, he said: “Well it is the work of God, and when we tell them what to do, they followed it to the letter. We also have good administration in place that effectively manages the little they are contributing.

“So, with the little support I can give for those who collected N50,000 (fifty thousand) each, I promised them one million naira and I could redeem it,” he said.

Giving an overview of the performance of the Cooperative Society, Olabinjo recalled that all the units have done credibly well except for a unit which did not perform up to expectation.

On the challenges he said, “The only challenge we have is a unit out of the 14 units of the Cooperatives. This is not surprising because out of the disciples of Jesus Christ there was a Judas. So, we have seen the Judas among the 14 units and that is the unit they contributed money and the money was not remitted.

“But I have taken the right steps, looked into it, and make sure all the coordinators of the unit do the needful. But people who contributed money got the needed assistance.”

He advised prospective and old members to seize the opportunities provided by the platform to mingle with people who are progressive, as this will culminate or fast track their entrepreneurial voyage.

In his speech delivered at the event,    the Vice President, Lagos State Cooperative Federation (LASCOFEDS), Mr. Fela Oduiyugbo, said he was enthralled with the giant stride accomplished by the Cooperative Society within just one year of its establishment.

He enjoined members of the Cooperative Society to buy into the idea of financial freedom championed by Hon. Olabinjo to enable them lead a good life.

“I have known Olabinjo for decades and he has refused to change from being a sincere personality, rendering helping hands to the masses,” he said.

Other key actors of the Cooperative Society ranging from the President to units’ heads, gave a laudable testimony of the organization.

According the President of the Cooperative, Hon. Chief Olatunji Akeredolu “the aim of Hon Olabinjo is to raise millionaires in the shortest possible time. To make this a reality, he gave a cash prize worth a million naira shared among  four outstanding Cooperators; three new tricycles for three units which performed exceptionally well; totaling 10 tricycles and one million naira shared by 20 members of BAO Singers Cooperatives.”

Also, the Chairperson Unit B, Alhaja Bolanle, charged the members of the Cooperative to maximize the opportunity proffered by the organization to achieve their respective aims and objectives.

She said the Cooperative had put in place several machineries to alleviate poverty among the masses.

In the same vein, the Chairman of Unit C, Prince James Fayemi, said the secret recorded thus far by the organization is traceable to the determination of the visioner of the Cooperative Society.

He said: “You know it’s a kind of empowerment. So, we may look at it as borrowing and refund. But at the same time, it is very very helpful. The main objective is to help the poor.

“My advice is, we should be focused because uneasy lies the head that wears the crown.”