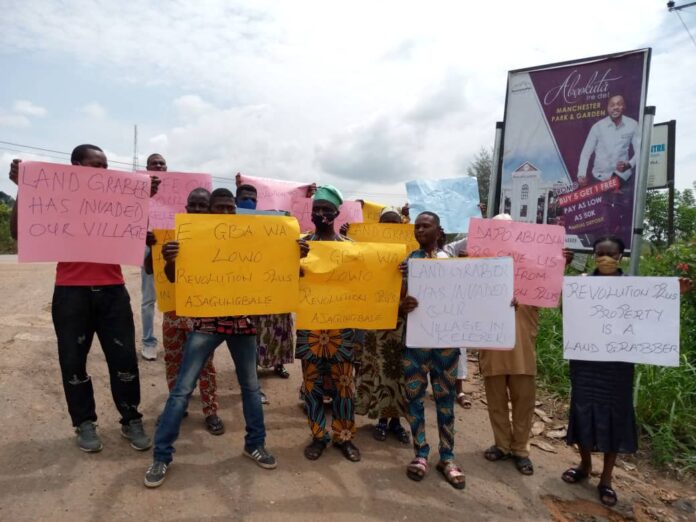 Residents of Kelemberi via Obada-Oko, Abeokuta in Ewekoro local government area of Ogun State has fingered Revolution Plus Properties in the land grabbing crisis rocking the community for over six months

The residents while protesting against this barbaric act on Thursday at Kelemberi, via Obada-Oko, Abeokuta alleged that one Mrs Idowu Fadipe who is not an indigene of their village and one Nurudeen Alowonle had connived with the popular real estate firm, Revolution Plus Properties to unlawfully take over 30 acres of their land and even allegedly demolished some houses and fences during the forceful takeover

It would be recalled that some weeks ago, the residents of this community had staged protest to kick against the invasion of their expanse of land by some gun wielding thugs hired by the landgrabbers appealing to Gov Dapo Abiodun and the Inspector General of Police, IGP Mohammed Adamu to come to their aid.

Speaking during the protest, Hon Sobowale Adekunle Alani disclosed that “there was never a time anyone of us sold any portion of our land to Revolution Plus Properties. We just saw them taking over our lands with erection of a big signboard. They even came with police and soldiers to intimidate us and send us packing from our lands. There was a time we wrote the government on this illegal act of Revolution Plus Properties but we have received no reply up till now.

“We are using this opportunity to call on the governor of our state, Prince Dapo Abiodun, the Inspector General of Police, IGP Mohammed Adamu, the state Commissioner of police, CP Edward Ajogun Awolowo and the Alake and Paramount ruler of Egba land, Oba Adedotun Aremu Gbadebo to deliver us from this criminal acts of Revolution Plus Properties and other landgrabbers disturbing the peace of our community”.

Speaking with our Correspondent, two other leaders of Kelemberi community, Chief Mojeed Ogundimu and Mrs Adenike Sangodimu also maintained that Revolution Plus Properties is nothing but a team of landgrabbers who are all out to to take by force what never belonged to them.

The duo alleged that the real estate firm had always insisted that nothing could hinder them from taking over the lands belonging to the village as they are ready use political powers and other connections within the government to frustrate any attempt by the villagers to reclaim their lands.

Adenike and Mojeed have also pleaded with the governor of the state, Prince Dapo Abiodun and the IGP, Mohammed Adamu to come to the aid of the villagers and deliver them from the management of Revolution Plus Properties who is hell bent on taking over their properties at all cost.

Chief Lukman Sangodimu during the protest also condemned the popular real estate company for its arm twisting tactics being deployed to take over the land of the people of Kelemberi saying that the villagers were however ready to resist all these illegal acts calling on Gov Abiodun to please set up machinery in motion to put a stop to all the antics of these landgrabbers.

The management of Revolution Plus Properties has however denied doing anything against the law as far as their properties in Kelemberi community is concerned.

Speaking with our Correspondent on telephone, one of the representatives of the company who refused to disclose her name explained that ” there are no issues on the land but if you want further information, you can please bring letter to that effect to our company’s office at Ita Eko, Abeokuta”.