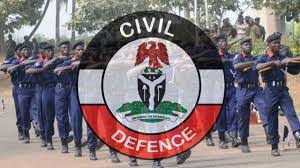 The Nigeria Security and Civil Defence Corps (NSCDC), Kaduna State Command, says it has arrested 14 suspected rapists and two others for alleged vandalism of transformers in Kaduna.

The NSCDC Commandant in the state, Mr Nuradeen  Abdullahi, made this known at a media briefing in Kaduna on Tuesday.

Abdullahi explained that since assumption of duty as Commandant on Oct. 1, the command had adopted new strategies which led to the arrest of many criminals in the state.

“From October 1st to date, we have made arrests of 14 suspected rapists and other suspects of sexual related offences.

According to Abdullahi, some of the cases were taken to court for cognisance, pending legal advice from the state Ministry of Justice.

“We appreciate the collaboration of Commissioner of Human Services, Kaduna Vigilance Service, and International Federation of Women Lawyers in effecting these arrests,” he said.

Abdullahi appealed to parents and guardians to take good care of their children, monitor their movement and the company they keep.

Insecurity: Security agencies urged to unite against terrorism in Nigeria

Army moves against insecurity with new outfit in South East