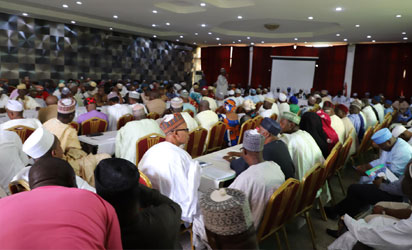 The elders under the umbrella of Coalition of Northern Elders for Peace and Development, (CNEPD), has expressed its regret about the South East region not being fairly treated in the country.

This was as they hailed Ohaneze Ndigbo, the apex Igbo sociocultural organisation, for distancing the Igbo race from inciting statements of the Indigenous People of Biafra, IPOB and its leader,Mazi Nnamdi Kanu.

In the statement signed by their National Coordinator, Engr. Zana Goni, and National Women Leader, Hajiya Mario Bichi, the Northern elders vowed that they will project the issues of alleged marginalisation of the South East region with a view to changing the equation, appealed to all Igbos to support the administration of President Buhari to succeed.

The Northern elders have also commended President Muhammadu Buhari for adopting civil approach in tackling the youth uprising that resulted in mass looting and burning of private and public infrastructures  across the country.

The group  in a statement, Wednesday, in Abuja, said the president’s directive to security forces was the reason that violent protesters were handled professionally in spite of the quantum of looting and destruction of properties during the ugly development.

The northern elders said the president’s wisdom in handling the youth uprising was the reason normalcy is returning in a short time in spite of the violence that trailed the youths’ action.

“We wish to sincerely thank president Muhammadu Buhari,the President and Commander-In-Chief of the Armed Forces for his wisdom in handling the youths uprising that resulted in killings, looting,stealing, and burning down of both private and public properties in some states of the federation.

“These actions by some misguided youths and criminal elements who were out to deliberately instigate religious and ethnic tensions in Nigeria were unfortunate.

“But we thank the president for the civil approaches he used  in dousing the tension,” the group said.

The northern elders thanked the region’s youths for “exercising restraint despite the high level of provocative comments and videos on social media during the violent protest which were intended to provoke the North into reaction.”

They also thanked Ohaneze Ndigbo and other South East groups for disowning what they referred to as inciting statements from Indigenous People of Biafra, IPOB and its leader, Mazi Nnamdi Kanu,saying their actions have proven that the region has unshaken belief in the unity of Nigeria.

“We also wish to strongly commend how swift the Ohananze Ndigbo, South East Peace Practitioners, Igbo Youths Worldwide, Igbo Leagues of Professionals and several other Igbo groups from distancing themselves from the so called  leader of Indigenous People of Biafra, IPOB,Mazi Nnamdi Kanu over his inciting comments which was aimed at setting us up against each other during the protests.

“This has endeared the Igbo nation to the North once again. This also has shown their resolve to build one and prosperous Nigeria of our dream where peace and justice shall be the hallmark.

“As elders, we must clearly state that the country has not been fair to Igbo people in all ramifications and we must admit this fact as true Muslims,” the statement said.

While charging that,”The Igbos must believe and work for the unity of Nigeria to enable other parts of Nigerians to speak up for them”,the elders said:”We are so pleased with the speed  at which many Igbo groups disowned Nnamdi Kanu and his evil intention.”

“This is an indication that Nnamdi Kanu does not represent the Igbo race in anyway and cannot speak for them,” the statement further said.

According to the Northern elders,” In solidarity, we shall continue to speak for peace,  justice and equity for every region of the country, because Nigeria belongs to all of us.”

“We therefore call on our Igbo brothers to support the government of President Muhamamadu Buhari to enable him succeed.

“President Buhari is doing a lot in terms of projects in the South East. The facts are there to see except for people who want to deliberately distort facts,” the statement added.