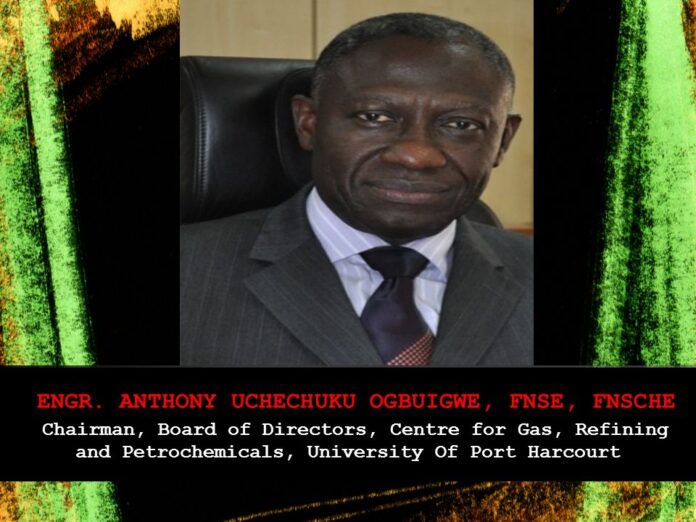 The Chairman Governing Board, Centre for Gas, Refining and Petrochemicals (CGRP), Engr.Tony Ogbuigwe said Nigeria has been well placed to become a refining hub.

He made this disclosure during the 5th edition of Nigerian Society of Chemical Engineers (NSCHE), International conference monitored virtually by Nigerian NewsDirect Newspaper on 17th November.

The conference which is an annual event, brings together certified chemical Engineers in Engagement with stakeholders to develop a working plan that will tackle deficit in the chemical industry and related fields.

This years edition of the conference was conducted through a webinar virtual means and had its theme as: “Towards A Robust Refining,Petrochemicals and Gas Industry In Nigeria”.

Delivering his speech during the conference, Engr.Tony Ogbuigwe stated that Nigeria is well placed to become the refining a hub which he highlighted to the easy access to west and central African markets.

According to him, with a 200 million population, we have a large market.

As the Largest crude oil producer in Africa and aggregate Nigerian deposit of petroleum product is approximately 55-60 million litres per day.

Tony Ogbuigwe, who also is the Group  revealed that global oil demand is expected to be a record 9.3 Mb/d lower in 2020 than in 2019,mostly because containment measures in 187 countries brought global mobility to halt.

He also explained that the recovery to the second half of 2020 is projected to be  gradual as economies come out of containment and activity levels rise but also hinted that demand is not expected to reach pre-crisis level.

In his presentation he enumerated that the mission of ARA is to serve as leader in Africa’s transition to cleaner fuels and called for the support of stakeholders.

He further stated that unified voice of African refiners and independent maketers  distribution will hence the flexing of fuel in Africa.