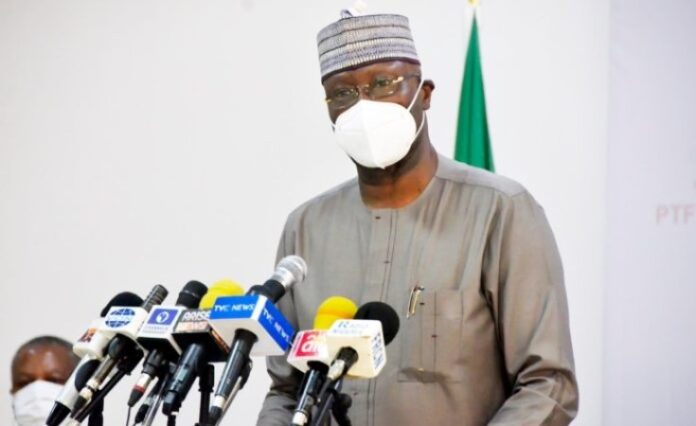 The Presidential Task Force (PTF) has said the country is winning war against COVID-19 pandemic amid the reducing numbers of reported cases.

The Secretary to the Government of the Federation (SGF)/Chairman of the PTF on COVID-19, Mr Boss Mustapha, said Nigeria’s response on COVID-19 is achieving impressive results.

The PTF chairman, who stated this at the daily briefing of the task force on Monday in Abuja, said “Nigeria continues to progressively witness declining confirmed cases of COVID-19 with a record low number of 79 cases on Sunday, Sept. 13.

“While this suggests that we are winning this war, the reality is that we need to improve on our commitment to eliminate the virus completely by abiding with the protocols so that we can return to a semblance of what was our normal life.

“In a very modest way, therefore, we could say that our National Response, under the guidance of Mr. President, is achieving impressive results and this has been commended by our development partners.

“The PTF wishes to use this opportunity to also thank our development partners as their support has contributed in no small measures to the successes so far recorded and we count on their continued support as we progress in tackling this pandemic,” Mustapha said.

While calling for caution, the PTF chairman said “one critical element we must not lose sight of is the fact that our cautious approach has tremendously helped in our containment efforts.

“ Therefore, we should avoid complacency at all cost. Our focus should go beyond flattening the curve and ridding our land of this virus just as we did with the polio virus.”

While decrying the industrial action by the Joint Health Sector Unions (JOHESU), the SGF admitted that the contributions of health workers had no doubt contributed to the nation’s gains.

The PTF chairman appreciated the National Association of Resident Doctors (NARD) for calling off their strike.

He further noted that the PTF viewed the recent declaration of industrial action by the Joint Health Sector Unions (JOHESU) as rather unfortunate and capable of reducing the gains and endangering more lives.

“We, therefore, call on JOHESU to stand up to be counted at this critical moment because a continuation of the strike could jeopardize the small gains made in the fight against the virus and the efforts to transform our health systems.

“The Minister of Labour and Employment has assured that every effort is being made to resolve all issues and have JOHESU call its members back to work.”

However, Nigeria Centre for Disease Control (NCDC) at midnight on Monday said that the death toll for the COVID-19 pandemic in Nigeria had jumped to 1, 083.

The NCDC made this known on its official twitter handle.

NCDC confirmed that there were 132 new infections .

It stated that one new fatality raised the death toll to 1,083. The agency said 132 new cases of COVID-19, the disease caused by the coronavirus, were recorded across Nigeria on Monday, Sept. 14.

The public health agency stated that the new cases now bring the number of confirmed infections in the country to 56,388.

It noted that 185  people had been treated and had recovered from the virus, bringing the nation’s number of recovery  to 44,337.

According to the agency,  Lagos State had the highest number of recorded cases on Monday with 52, Gombe State followed with 27 cases and Plateau State came next with 17 cases.

The NCDC said that as at Sept. 14, 132 new confirmed cases and one death were recorded in the country.

Meanwhile, the agency said that it was critical for Nigerians to take responsibility to maintain the gains achieved in the nation’s response to COVID-19, to reduce the risk of a spike in cases as international flights resume.

“We have updated the self-isolation guideline to reflect the current protocol for return travelers, this can be accessed on our website covid19.ncdc.gov.ng. Every returning traveler must carry out a COVID-19 test, after seven days of self isolation,” it stated.

Gov. Abiodun releases grants for projects in 20 LGs in Ogun