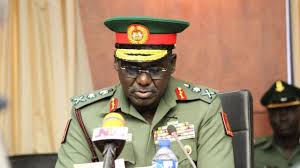 The Chief of Army Staff, Lt.-Gen. Tukur Buratai, says the Nigerian Army has discharged its constitutional responsibilities effectively in defending the sanctity and integrity of Nigeria in the last 60 years.

Buratai, while speaking to the Newsmen on the country’s journey so far at 60, said the army would also continue to ensure that the unity of Nigeria is not compromised.

He said that the Nigerian army had since pre-independence played critical roles in ensuring the country’s corporate existence as well as contributing to its economic, political and socio-economic development.

He said that the participation of the army in various conflicts within and outside the country was significant, adding that it had held the country together as a united and indivisible country.

According to him, if you look at our constitutional role and of course vis-a-vis our defence priority, the defence of Nigeria from external aggression is number one priority and to maintain her territorial integrity is second.

“These key priorities are fundamental and this has manifested in the successful prosecution of the Nigerian civil war; an unfortunate war of the brothers with unfortunate consequences of war as it should be.

“At the end of the war, it has been declared no victor, no vanquish but the memory still lingers on in terms of the human casualties, the economic consequences and so on.

“Equally, over the years, we have participated in several internal security operations to ensure that the country does not disintegrate and remains one.

“This has been done very successfully when you talk of the western region crisis, the Maitatsine crisis, the Taliban crisis and what we are facing today, the Boko Haram crisis.

“The Nigerian army has kept the country united, strong and it has further enhanced the image of the country with the patriotic and gallant performance of our troops across the various theatres of operation,’’ he said.

The army chief commended officers and men who worked tirelessly to ensure that Nigeria remained one and secured in spite of the security challenges over the years.

He added that the country was reaping from their patriotic stand.

“Nigeria is still waxing stronger, we have gone through different challenges in terms of the economic and political turbulence and this has been stabilised for now as far as I am concerned.

“With more resilience, with more support from the public, we will ensure we make a great difference and the challenges that we are facing now will be a thing of the past,’’ he said.