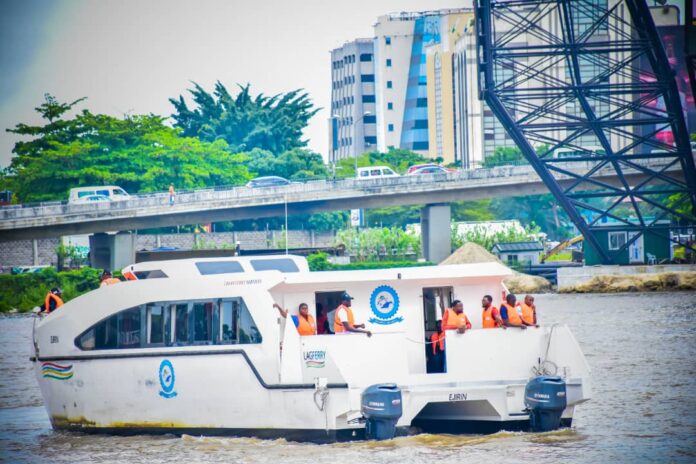 In commemorating Nigeria’s 60th Independence, the Lagos State Government, through the Lagos Ferry Services (LAGFERRY) has slashed the Fares for its boats users to 60 per cent.

Disclosing this on Monday in a press briefing at Ikeja, the State Capital, the  Managing Director, LAGFERRY, Hon Abdoulbaq  Balogun, said that with the reduction in price, users of LAGFERRY boats, are only to pay 60 per cent of  all  boat trips from all routes within the state between 30th September and 2nd October, 2020.

According to  him, the State Government in celebration of Nigeria’s 60th Independence made the decision to celebrate passengers for embracing water transportation as a reliable alternative means of decongesting the road.

He said: “As part of efforts to celebrate Nigeria 60th Diamond Independence Anniversary and keeping in line with one of the core pillars of the Governor, Mr. Babajide Sanwo-Olu’s T.H.E.M.E.S Agenda of Transportation and Traffic Management, the Lagos State Government through its agency Lagos Ferry Services (LAGFERRY) has lined up activities to celebrate the day.

“The State Government in appreciating the commuting public for embracing water transportation as a reliable alternative means of decongesting the road, has decided in celebration of Nigeria 60th Independence to reduce prices on all boat trips from all routes within the state to 60% on 30th September and 2nd October,  while on board passengers will stand a chance to win numerous prizes and tickets to the boat cruise via raffle draws.”

The MD, who disclosed that all passengers on LAGFERRY boats are fully insured, added that the boats are safe with strict adherence to all COVID-19 safety protocols and other safety regulations.

According to him, the protocols include compulsory wearing of life jackets by all passengers before boarding, washing of hands with water/sanitizers, temperature check,  maintaining social distancing and operating within regulated hours.

To further commemorate the Independence anniversary,  LAGFERRY   on October 3rd through its 180 ton MV Adimu Orisa will play host to Lagosians with a boat cruise  scheduled to take off from Falomo Ikoyi.

“Here revellers will have the opportunity to savour the ambience of the Lagos coastline,” Balogun said.

According to the LAGFERRY Boss, the boat tour scheduled for October 1st will take off from Mile 2 to Badagry, while prospective tourists will have the opportunity to sight the First Storey Building in Nigeria, Point of No Return, Slave Baracoon, among others.

Also on the schedule is a tour from Falomo to Epe, with prospective tourists to sight Ancient Aiyetoro Market, Chief Oluwo Fish Market, LASU Epe Campus, Epe Resort, among others.

Stating the symbolic significance of commemorating Nigeria’s independence,  Balogun: “Let me state here that as Nigerians, we have every cause to celebrate our diversity and unity every October 1st and Lagos being the Centre of Excellence with largest concentration of all ethnic groups in the country, it has a pivotal role to play to sustain that unity. This is why we are specially celebrating our independence to showcase our history, culture and heritage.”

He however, reiterated the Lagos State Government’s commitment to continue to pay high priority to safety on the waterways.

In his remarks, the Special Adviser to the Lagos State Governor on Tourism, Art and Culture, Hon. Bonu Solomon Saanu, said the commitment of the Ministry of Tourism towards the event is to promote water tourism, and to encourage people to go on waterways.

“We want to showcase the beauty of Lagos  on water. We want to encourage people to go on water. The T.H.E.M.E.S Agenda of Mr. Governor is to make Lagos a 21st century economy and we are working towards that.

“The phobia that people have for water is what we want to take out. We want to encourage our people to move from road to water. Our waterways are safe.

He added that the Government is working assiduously to position the State’s waterways to meet the standards of the developed world.

“The way they structure their own Ferry system over there (developed countries) is perfect, which we are working seriously that such system should be handed over to LAGFERRY to run. We are working towards that and this is the reason why the Ministry of Tourism wants to promote water tourism, through LAGFERRY.”

He however, lamented that the sour state of the Okoko to Badagry part of the Orile-Badagry expressway which belongs to the Federal Government is a bane that has rendered tourism sites in Badagry to a state of despair.

He mentioned that the State Government is working with the Federal Government to expedite repairs on the route.

Lamenting the despair state of the road, he said the condition is an eyesore that has deterred tourists to shun the tourism rich sites of Badagry.

He said: “The road to Badagry is an eyesore and we all know that, that road is being divided into two. The first portion is that of Lagos State, which is from Orile down to Okoko. Then from Okoko through Agbara, down to Badagry belongs to the Federal Government.

“As at yesterday (Sunday), the people of Badagry were crying. Somebody made a  post this morning that they slept on the road. That road has just succeeded in killing tourism sites in Badagry.

“Tourists don’t visit Badagry anymore due to the condition of the road. Not only that, if you notice, on every five minutes drive, you see Policemen stationed on that road, and this has been scaring Tourists along the route.