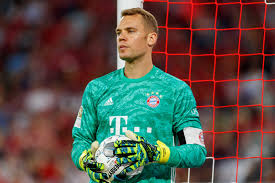 Manuel Neuer is rapidly approaching 100 caps, but before that milestone is already set to become Germany’s most-capped goalkeeper.

He will then move one ahead on Tuesday in Spain.

But now 76, Meier is not too fussed about losing the record, saying it “is about time” that his mark is surpassed.

“I set the mark 41 years ago. That shows it was a great achievement of mine. I congratulate Manuel Neuer,” Meier said.

Oliver Kahn could have already broken Meier’s record more than decade ago but lost his first-choice role to Jens Lahmann ahead of the 2006 home World Cup.

He retired after the tournament with 86 caps.

He also won every club title on offer at Bayern Munich.

He earned his first cap in 2009 and then become first-choice just ahead of the 2010 World Cup when original number one Rene Adler fractured a rib.

Neuer has never looked back and even retained his status after a month-long injury break ahead of the 2018 World Cup in Russia.

This was in spite of a fierce rival in FC Barcelona’s Marc-Andre tre Stegen.

Now a long-time captain of Bayern Munich and Germany, Neuer has redefined the goalkeeper role, often acting as kind of a sweeper.

He has been named the best goalkeeper in the world four times.

“Manuel Neuer is an exceptional goalkeeper, a god-send for football in Germany.

“He was one of the biggest factors for the development of our game and for the success in the past decade,” national team coach Joachim Loew said ahead of the milestone.

“Record goalkeeper in Germany —- that is a special achievement,” Loew added in reference to Germany’s long and proud tradition of having quality goalkeepers.

According to Meier there is no end in sight, with the postponed Euro 2020 tournament next year and then the World Cup 2022 in Qatar.

“Manuel Neuer will surely play more than 120 internationals. There is nothing wrong with him,” Meier said.

Neuer, who earlier in the year renewed his Bayern Munich contract until 2023 and is not afraid of new rival Alexander Nuebel there, is wasting no thoughts on retirement.

“I am fit, feel really good and enjoy football,” he said.