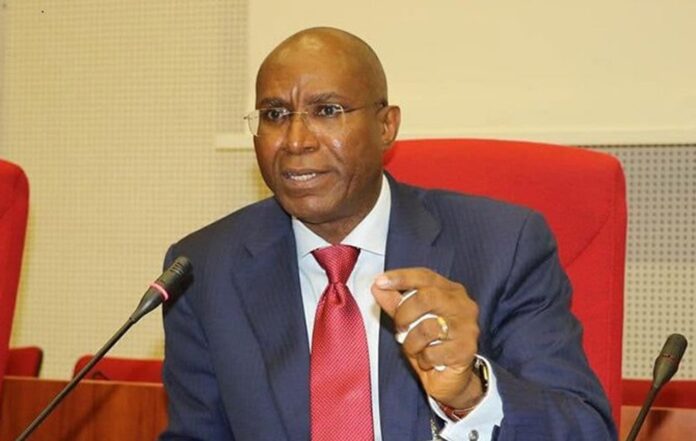 The Deputy President of the Senate and Chairman, Senate Adhoc Committee on Constitution Review, Senator Ovie Omo-Agege has assured that the Ninth National Assembly will expand the political space for women in the ongoing amendment of the 1999 Constitution.

Senator Omo-Agege stated this in Abuja when he hosted a delegation of a non-partisan organisation, Women in Politics Forum, led by Ebere Ifendu.

The Delta Central lawmaker noted that since the women represent 58 percent of the Nigerian population, their  voices must be heard.

He charged them to take advantage of their numerical strength during elections.

Explaining his reason for sponsoring a constitution alteration bill which seeks to reserve 30 percent of cabinet appointments for youth and women at the federal level and 40 percent at the state level, he said the intention is to expand the political space for them.

“We are determined to expand the political space for women. It is also good that you understand that we operate within the confines of the Constitution. That same Constitution has prohibited discrimination against anoyone irrespective of gender.

“ So, that is the challenge we have always faced with the Gender Equality Bill, sponsored by Senator Biodun Olujimi. Because inasmuch as we are very disposed to assist her to achieve the goals of those bills in consonance with the Beijing Protocol, the challenge is how do we achieve that without enthroning a new set of discrimination? And to strengthen women participation, something has to give,” he said.

The lawmaker who represents Delta Central assured women that their interests would be protected, but not to the detriment of the constitutional provisions against discrimination of whatever form.

He called on the Executive arm of government to always engage the Legislature before signing treaties and agreements.

This, he explained, will enable accelerated domestication by the National Assembly.

He also tasked the forum to help in mobilising the House of Representatives in concurring to the Sexual Harassment Bill passed by the Senate as well as the domestication of the Violence Against Persons  (Prohibition) Act in all the states of the Federation.

In her earlier remarks, Ifendu called for the inclusion of Affirmative Action in the Constitution.

She cited African countries like Kenya, Uganda, Senegal, Rwanda and Seychelles to buttress her position.

“There is no better time than now to achieve an inclusive democracy. We need to move from civil governance to true democracy where women, youth and persons with disabilities will have equal opportunities to participate in governance,” she said.