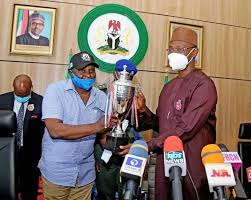 Sule made this known in Lafia on Thursday while receiving the medals won by sports men and women from the state in 2020.

Coaches from Nasarawa United that were invited to the national team were presented to Sule at a ceremony, held at the Government House, Lafia.

The Governor said that with the present sitting arrangement in the Lafia City Hall, government would spend less money to convert the facility into a multipurpose indoor sports arena.

He said that already various sports like basketball, wrestling, boxing and weightlifting, among others, were being played.

According to Sule, sports can be fully exploited to contribute substantial revenue to government coffers, citing the example of the NBA, NFL and NHL in the U.S. that contributing greatly to the economy of their country.

The Governor said his administration would harness the various talents, knowledge and experiences in the sports sector in order to make the youth in the state live productive lives.

“Most of the sports arenas that I have visited all looked like the City Hall. When the idea came, I think it was a perfect idea. I have absolutely no problem whatsoever being able to convert it into an indoor sports arena,” he said.

He commended the state Commissioner for Youth and Sports, Othman Bala-Adam, for his enthusiasm, which serves as motivation and encouragement for the athletes to excel.

Sule announced a donation of N10m in support of the coaches and victorious sports men and women that won various medals for the state during the last year.

Earlier, Bala-Adam, said the present administration has given sports the needed support, encouragement and motivation, which translated into victory for athletes in the state.

Bala-Adam disclosed that during the past year, athletes in the state won 22 gold, 11 silver and 12 bronze in different sporting activities.

The Commissioner added that because of the Governor’s disposition towards sports development and youth empowerment, 5 national coaches were invited from clubs in the state.

Also speaking, Emir of Doma, Ahmadu Aliyu-Ogah, who doubles as the sponsor of the Andoma Peace and Unity National Basketball Tournament, urged the Governor to consider establishing state teams for basketball and golf.

This, he explained, was because the state is blessed with abundant talented sports men and women in the two sports.

The Andoma also made case for the government to support talented young men and women in various sporting activities, by placing them on salary to serve as moral booster.

He urged the state government to erect an indoor basketball court inside the Lafia City Hall, to not only provide training facility for basketballers in the state, but enable the state host national basketball tournaments.