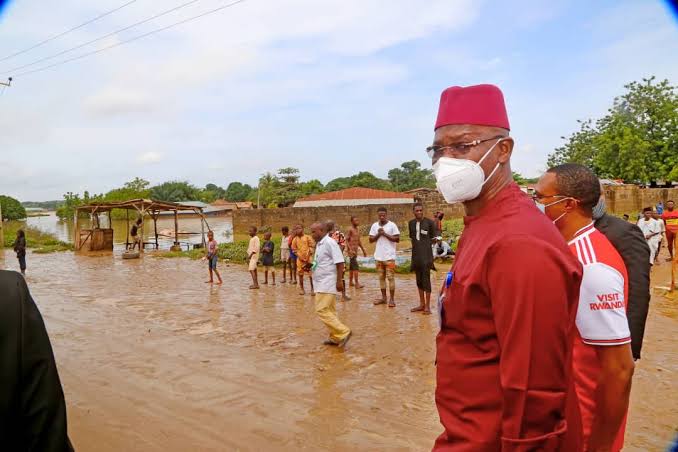 Nasarawa State Governor, Engineer Abdullahi Sule, on Sunday, visited areas affected by flood in Nasarawa town, headquarters of Nasarawa Local Government Area, where the Governor ordered for the immediate evacuation of the flood.

This was contained in a statement issued by the Chief Press Secretary to the Governor, Mallam Ibrahim Addra.

According to the statement, Engineer Sule equally directed that relief materials including food items and mattresses be distributed to persons affected by the flood.

This is the second time Nasarawa town is being ravaged by flood in less than two weeks.

The press release issued by the Nasarawa CPS reads:

“Governor Abdullahi A. Sule of Nasarawa state has ordered the evacuation of persons whose houses have been submerged by the latest flood waters that ravaged Nasarawa town of Nasarawa Local Government Area.

“Governor Sule has also ordered that food items, mattresses and other relief items be provided without delay.

“The Nasarawa state Governor who rushed to the ancient town on getting the report of the incidence sympathize with leadership and people of the area.

“He also thanked the Emir of Nasarawa Alhaji Ibrahim Jibrin and the Chairman of the local council for their prompt actions in assessing the situation.

“Governor Sule urged the people to desist from building on waterways and stop indiscriminate dumping of refuse in drainages.

“He also expresses commitment of his administration to take a second look at the channelisation project while hoping to seek the collaboration of the Federal Government in tackling the age-long ecological problems in the area.”