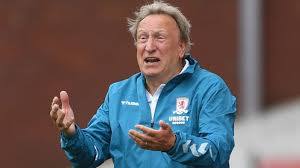 Middlesbrough said in a statement that Warnock, 71, will self-isolate in line with government and league protocols.

“Neil is in good spirit and we look forward to welcoming him back after his period in isolation,” the club said.

Warnock took charge of Middlesbrough in June, replacing Jonathan Woodgate who was sacked when the club was one place above relegation. Under Warnock, Boro won four of their final eight games to move up to 17th.

Middlesbrough began the 2020-21 seasons with a 1-0 defeat by Watford and crashed out of the League Cup with a 2-0 loss to Barnsley on Tuesday. They face Bournemouth in the Championship on Saturday.