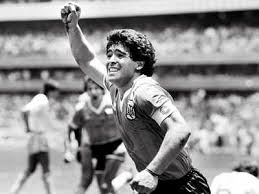 Argentina that has declared three days of mourning for its soccer idol Diego Maradona is according him all the paraphernalia of state burial, as the lying-in-state begins today. 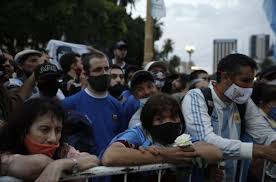 Maradona’s body arrived at the presidential palace in Buenos Aires, Argentina early today for the lying-in-state, with thousands of grieving Argentines queueing to say the final goodbye.

Maradona, regarded worldwide as a football genius died on Wednesday at the age of 60.

The mourners file past a barricade at the Presidential palace. Maradona’s coffin is at the back of the barricade

Video streamed by Argentine paper La Nacion showed the people, wearing face masks, entering a room in the palace to file past the coffin draped in Argentina colours.

The weeping fans gathered outside as Maradona’s coffin was lifted out of an ambulance and brought into the palace on Wednesday night. 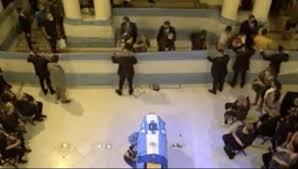 It is expected to lie in state for three-days.

Others gathered outside the Buenos Aires stadium where Maradona began his career and which has since been renamed in his honour, setting up a makeshift shrine to celebrate Argentina’s legendary number 10.

His death has also been keenly felt in Europe, especially in Naples where he steered an unfashionable side to two Italian league titles and where fans let off flares in tribute outside the stadium last night.

Regarded by some as the greatest player of all time, Maradona combined awesome footballing ability with a flair for showmanship and a turbulent personal life marked by drug and alcohol problems. 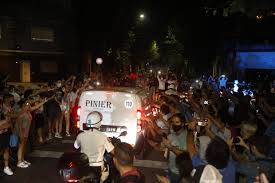 An autopsy report leaked to Argentine media said he died in his sleep after suffering heart failure, only two weeks after leaving hospital following surgery to remove a blood clot on his brain.