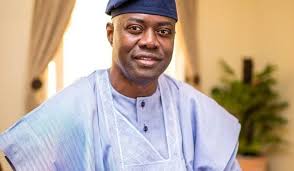 Gov Seyi Makinde of Oyo State, on Tuesday, visited the Soun of Ogbomosho, Oba Jimoh Oyewumi Ajagungbade, whose palace was invaded by hoodlums in the wake of EndSARS protest.

It was reported that Makinde, during the sympathy visit to the traditional ruler of the ancient town, inspected structures, vehicles and other valuable property damaged during the incident.

Speaking at the palace, the governor gave a directive for immediate release of N100 million to the monarch, for the renovation of the palace.

He also instructed the State’s Commissioner for Local Government and Chieftaincy Matters, Chief Bayo Lawal, to take inventory and make an evaluation of vehicles and other items destroyed for repair and replacement where necessary.

“Beyond the EndSARS protest, most Nigerians are frustrated over prevailing harsh economic reality in the country and if government fails to address youth idleness with gainful employment, there may be future disaster,” Makinde said.

He said that his administration remained committed to ensuring that youth in the state were meaningfully engaged.

The governor said that his government was not against peaceful protest, but admonished protesters to be responsible enough while protesting.

In his response, Oba Oyewunmi said he appreciated the visit and promised that the traditional institution would continue to play its roles in supporting the government for a better society

He urged government to continue carrying out its numerous responsibilities for the overall development of the state.

It was reported that the governor and his entourage also paid condolence visits to the families of the three men that died in the course of the EndSARS protest in the town.

The deceased are Isiaka Jimoh, Taiwo Adeoye and Moshood Ganiyu.

Makinde, who released N1million to each of the families, urged them to take the untimely demise of the deceased as an act of God.

The Govenor also visited Ogbomosho Area Police Command, where he held a brief closed-door meeting with the officer in charge.